Steve Benen points me to the last paragraph of today’s Washington Post story about our shiny new $1 trillion spending package:

At domestic agencies, the EPA’s budget would be cut by $60 million, and the IRS would lose $345.6 million. The nation’s tax agency also would be banned from targeting organizations seeking tax-exempt status based on their ideological beliefs.

Isn’t that great? Republicans loathe the EPA as an engine of economic destruction that’s dedicated to destroying the coal industry, shredding the Fifth Amendment, and regulating American corporations into bankruptcy. But even at that, they 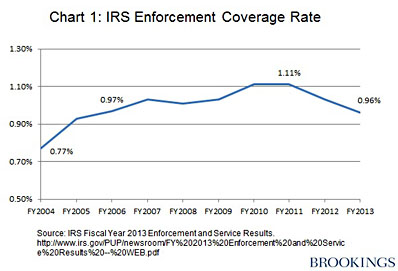 only lost $60 million. The IRS, by contrast, lost six times as much.

I’m sure the public justification is punishment for the IRS’s supposed targeting of conservative tea party organizations. But in fact, this is business as usual. After being decimated for years following the Roth hearing witch hunts of the 90s, the IRS managed to slowly but steadily rebuild its enforcement staff during the aughts. Things had gotten bad enough that even George Bush was on board. Then Republicans took over Congress after the 2010 elections, and enforcement was once again targeted for cuts. In every year since then, the IRS budget has declined, enforcement staff has been cut, and audit coverage has gone down.

Why? It’s simple: If the IRS budget gets cut, it means fewer audits of corporations and rich people. Any other questions?