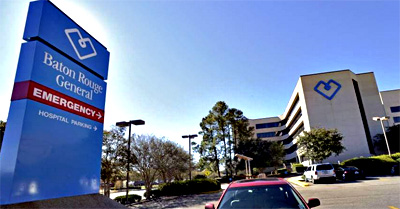 Louisiana’s capital city is losing one of its emergency rooms:

The Baton Rouge General Medical Center-Mid City will close its emergency room within the next 60 days, a victim of continuing red ink and the Jindal administration withdrawing the financial support that kept it open.

….The General’s Mid City campus suffered a financial hit as a result of the April 2013 closure of the LSU Earl K. Long Medical Center….More and more poor and uninsured patients from the low-income neighborhoods of north Baton Rouge ended up at the Mid City hospital, which was the next-closest facility.

Mid City hospital reported losses of $1 million a month as more and more patients who could not pay arrived. Losses jumped from $6 million to $8 million annually from 2009 to 2012, then up to $12.5 million in 2013, according to Baton Rouge General. Last year, the facility lost $23.8 million.

The nearest ER for residents who are currently served by Mid-City is now 30 minutes further away, and it’s a certainty that people are going to die because of this. But what’s the real story behind this closure? Shouldn’t the expansion of Medicaid be offsetting the increased losses on uninsured patients?

You bet it should. And it would, if Bobby Jindal were willing to accept Obamacare’s offer of virtually free Medicaid expansion. But he’s not, and that means Baton Rouge is losing one of its central emergency rooms and more people will die who otherwise could have been saved. That’s some nice work, Bobby. Michael Hiltzik has more details here.