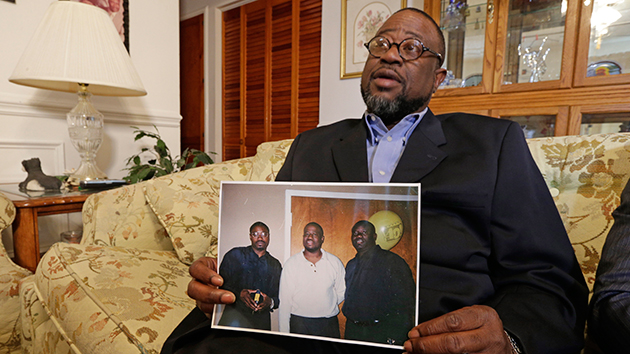 Anthony Scott holds a photo of himself, center, and his brothers Walter Scott, left, and Rodney Scott, right, at his home near North Charleston, S.C., April 8, 2015. Chuck Burton/AP

The family of Walter Scott, the man who died on Saturday after being shot eight times by North Charleston police officer Michael Slager, has decided to sue Slager, the city of North Charleston, and its police department. The civil lawsuit, which will seek damages for wrongful death and civil rights violations, follows murder charges already filed against the now-dismised officer.

Scott’s family is hardly the first to seek civil damages after a police killing. In recent months, relatives of Mike Brown, Tamir Rice, and Eric Garner have all pursued civil court claims, where success isn’t contingent on a criminal ruling against any police officer. But in the event that the Scott family wins a settlement, it’s highly unlikely that Slager himself will have to pay. As I reported in January:

Instead, taxpayers will shoulder the cost. Between 2006 and 2011, New York City paid out $348 million in settlements or judgments in cases pertaining to civil rights violations by police, according to a UCLA study published in June 2014. Those nearly 7,000 misconduct cases included allegations of excessive use of force, sexual assault, unreasonable searches, and false arrests. More than 99 percent of the payouts came from the city’s municipal budget, which has a line item dedicated to settlements and judgments each year. (The city did require police to pay a tiny fraction of the total damages, with officers personally contributing in less than 1 percent of the cases for a total of $114,000.)

This scenario is typical of police departments across the country, says the study’s author Joanna Schwartz, who analyzed records from 81 law enforcement agencies employing 20 percent of the nation’s approximately 765,000 police officers. (The NYPD, which is responsible for three-quarters of the cases in the study, employs just over 36,000 officers.) Out of the more than $735 million paid out by cities and counties for police misconduct between 2006 and 2011, government budgets paid more than 99 percent. Local laws indemnifying officers from responsibility for such damages vary, but “there is little variation in the outcome,” Schwartz wrote. “Officers almost never pay.”

Schwartz’s study did not include North Charleston or any other law enforcement agency in South Carolina. But if other jurisdictions serve as any indication, Slager likely won’t pay a dime, even if a jury finds him guilty of murdering Scott. Out of the 7,000 cases of police misconduct Schwartz studied, only 700 officers were convicted of a criminal charge. And only 40 officers ever contributed to a civil settlement out of their own pocket.