Five of the planet’s biggest banks have finally been forced to plead guilty to collusion charges in the foreign exchange market:

The Justice Department forced four of the banks — Citigroup, JPMorgan Chase, Barclays and the Royal Bank of Scotland — to plead guilty to antitrust violations in the foreign exchange market as part of a scheme that padded the banks’ profits and enriched the traders who carried out the plot….Underscoring the collusive nature of their contact, which often occurred in online chat rooms, one group of traders called themselves “the cartel,” an invitation-only club where stakes were so high that a newcomer was warned, “Mess this up and sleep with one eye open.” To carry out the scheme, one trader would typically build a huge position in a currency and then unload it at a 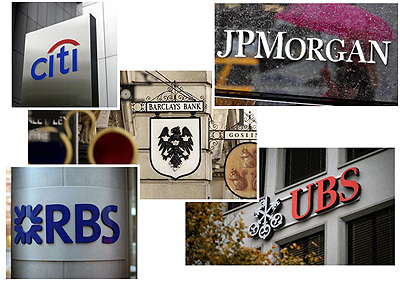 crucial moment, hoping to move prices. Traders at the other banks agreed to, as New York State’s financial regulator put it, “stay out of each other’s way.”

….The guilty pleas, which the banks are expected to enter in federal court later on Wednesday, represent a first in a financial industry that has been dogged by numerous scandals and investigations since the 2008 financial crisis. Until now, banks have either had their biggest banking units or small subsidiaries plead guilty.

….As part of the criminal deal with the Justice Department, a fifth bank, UBS, will plead guilty to manipulating the London Interbank Offered Rate, or Libor, a benchmark rate that underpins the cost of trillions of dollars in credit cards and other loans.

The total fine is about $5 billion, and it’s about damn time this happened. Unfortunately, I assume that a billion dollars each is basically pocket change that’s already been fully reserved on their balance sheets. Needless to say, not a single dime of this will hit the actual people running the banks, who couldn’t possibly be expected to know that any of this stuff was going on. They were too busy drinking their lunches and remodeling their corner offices to know what a few rogue traders on the 23rd floor were doing. The Times confirms that life will go on as usual:

For the banks, though, life as a felon is likely to carry more symbolic shame than practical problems. Although they could be technically barred by American regulators from managing mutual funds or corporate pension plans or perform certain other securities activities, the banks have obtained waivers from the Securities and Exchange Commission that will allow them to conduct business as usual. In fact, the cases were not announced until after the S.E.C. had time to act.

It’s good to be king.