From the LA Times:

Clinton campaign gets into another scuffle with the press corps

Hillary Rodham Clinton’s long-frosty relationship with the media hit another icy patch in New Hampshire on Monday when campaign officials told major news organizations that certain reporters were not welcome at the candidate’s events.

….The campaign early on asked the press corps to establish and run a pool system in which a small group of reporters would cover such events and file reports that all reporters could share. The pool duty rotates among a group of roughly 14 news organizations that have committed to send a reporter when their turn comes.

Monday, that turn fell to the Daily Mail. The campaign did not approve. Campaign aides told the paper’s reporter, David Martosko, that he would not be allowed into the day’s pooled events….To many reporters, the campaign was crossing a line….The pool arrangement is designed to keep campaign officials out of the business of 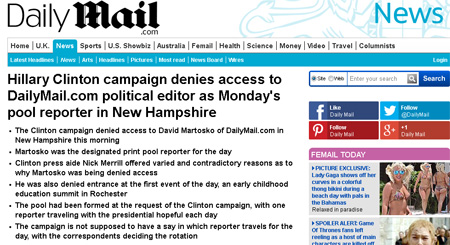 deciding which reporters can represent the media at what events.

The HRC campaign says the problem is that the Mail is a foreign news outlet, but it’s hard to take that excuse at face value since they’ve had no problem with allowing other foreign news organizations in the pool. They also apparently gave no warning that Martosko wouldn’t be allowed his turn. (Martosko’s version is here.) So what’s going on?

Whenever I read stuff like this, I can’t figure out what to think. On the one hand, the press is what it is. It’s part of the campaign landscape. Even if they act badly, what’s the point in deliberately pissing them off, especially in dumb little ways that don’t really accomplish anything?

On the other hand, maybe the Clinton folks have decided that the traditional press simply doesn’t matter anymore. So the hell with it. She doesn’t like the way they treat her, so she’s going to screw with them without worrying about it.

I dunno. I really can’t make sense out of it.

NOTE: I’m not asking whether the press treats Clinton badly. I think the answer is pretty obvious, but that’s not what this post is about. I just want to know what motivates an obvious professional like HRC to keep giving them reasons not to like her.