My tax plan would blow up the tax code and start over. In consultation with some of the top tax experts in the country, including the Heritage Foundation’s Stephen Moore….

Hmmm. I think we can probably stop there. If Stephen Moore is one of the brains behind this, we can be pretty sure it’s the usual hodgepodge of innumerate 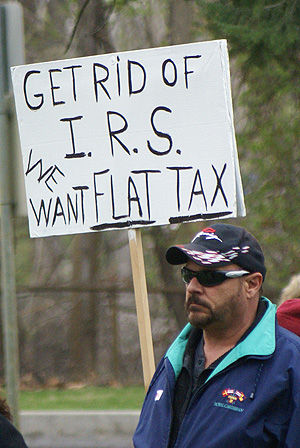 nonsense he’s famous for. But at least Paul’s op-ed doesn’t lack for tea party applause lines! Here are my favorites: “seized by the IRS,” “rogue agency,” “harass anyone who might be adversarial to President Obama’s policies,” “economic steroid injection,” “rot in the system,” and “crony capitalists and lobbyists exploded his noble crusade.”1

In any case, I’ll save you the trouble of reading the whole thing. It’s the usual flat-tax utopia: One rate for everyone, no deductions, end of story. No discussion of how to define “income,” of course, which is what makes the tax code complicated in the first place. But no matter. According to Paul, the rich will end up paying 14.5 percent in taxes, with no loopholes to pay less. Given that the rich currently pay about 22 percent of their income in federal taxes, they should be pretty happy about that. They should also be pretty happy that he’s getting rid of the estate tax entirely.

And the middle class? Well, they no longer have to pay payroll taxes. Just 14.5 percent of their income.

Happy days! And how will this add up? The usual way: it will supercharge the economy blah blah blah, and we’ll all be making such huge buckets of cash that tax revenues will go up. Easy peasy.

The song never changes with these guys. But it’s a siren song, and Americans have never been very good at math. I’m sure it will sound good to lots of people, and it will sound great to the lucky few. Hell, I figure it would save me personally $15,000 a year, maybe more. Rand Paul 2016!

1That would be Paul’s buddy Steve Forbes, whose noble flat-tax crusade in 1996 went nowhere thanks to the shadowy forces of….Bob Dole.