A few days ago everyone thought Greece had capitulated completely to European demands for further austerity. It turns out that was all sorts of wrong. Over the weekend, Europe’s finance ministers met in Brussels and eventually released a statement that showed Greece what real capitulation looks like. Marcus Walker of the Wall Street Journal summarizes things pretty well:

Sunday’s statement on Greece by eurozone finance ministers will go down as one of the most brutal diplomatic démarches in the history of the European Union, a bloc built to foster peace and harmony that is now publicly threatening one of its own with ruination unless it surrenders.

….The other 18 euro members were late Sunday pushing Greece to implement all of the austerity measures and broader economic overhauls its voters have twice rejected—in elections in January and in a referendum on July 5—not in return for new rescue loans, but as a precondition for even talking about them.

….The demands from the so-called “Eurogroup” of finance ministers range from handing Greek public assets to a fund in Luxembourg to auction off to giving 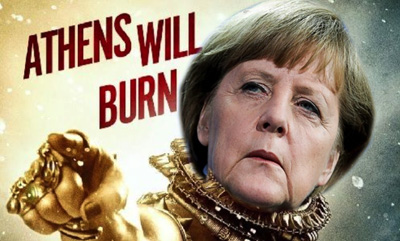 Yep. Greece not only has to agree to additional conditions, that’s just the starting point. It has to actually pass them into law before the rest of Europe will even agree to open further talks—at which point Greece will learn what Europe really wants from them. Considering that Germany has already demanded they hand over €50 billion in public assets for eventual privatization to pay off loans, it’s hard to know just how much more they could demand. But apparently there’s more. Much more.

A senior EU official described this as an “exercise in extensive mental waterboarding,” and that seems pretty appropriate. Actual shooting wars have ended with the victors demanding less onerous terms than these.

Greece hasn’t responded yet, and it’s hard to know what their next move will be—primarily because it’s hard to know what’s really behind the European demands. Are they harsh but nevertheless made in good faith? Or have they deliberately been crafted to be impossible to accept because the rest of Europe is fed up and simply wants Greece to exit the eurozone?

Nobody knows. France presumably wants Greece to stay. Germany gives every indication that it wants Greece to get the hell out and go its own way. In any case, Alexis Tsipras’s gamble that the threat of default and Grexit would scare the rest of Europe has obviously backfired spectacularly. Even Greece’s friends—relatively speaking—seem not to care much anymore. Maybe they’d prefer Greece to stay and the eurozone to remain intact, but if it doesn’t happen, they’ll shrug and move on.

As for the consequences, my guess is that whatever comes next will matter only to Greece. The rest of Europe will be largely unaffected. If Greece accepts austerity, Greece will suffer and everyone else will sigh. If Greece defaults and exits the euro, European institutions will barely notice that a supposedly key pillar of the EU—that the euro is inviolable—has been shattered. For now, anyway, Greece is seen as unique: a singularly reckless country that lied to get into the euro in the first place and never should have been part of it. Nobody thinks this debacle will repeat itself.

It doesn’t matter if this is true or not. What matters is that it’s widely accepted, and that means Greece no longer has any leverage. They either become a ward of Brussels—Europe’s Detroit, if you will—or they default and leave the euro. That’s it.

Given that, I’d say I’ve moved from being about 50-50 on either option, to being about 80-20 in favor of default and Grexit. Make no mistake: the economic and social devastation would be immense. But eventually things would get better. Conversely, given the events of this weekend, it’s no longer clear if that would be the case if Greece stays in the euro. The pain would be all but unending. At long last, Grexit now looks not only possible, but maybe even inevitable. If so, better now than later.