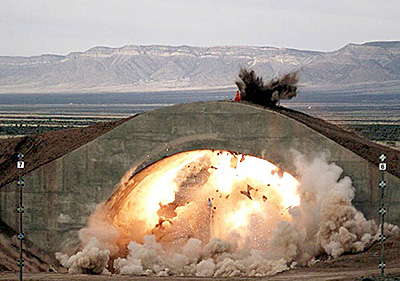 From W.J. Hennigan on the front page of this morning’s LA Times:

As diplomats rush to reach an agreement to curb Iran’s nuclear program, the U.S. military is stockpiling conventional bombs so powerful that strategists say they could cripple Tehran’s most heavily fortified nuclear complexes, including one deep underground….U.S. officials say the huge bombs, which have never been used in combat, are a crucial element in the White House deterrent strategy and contingency planning should diplomacy go awry and Iran seek to develop a nuclear bomb.

….U.S. officials have publicized the new bomb partly to rattle the Iranians. Some Pentagon officials warned not to underestimate U.S. military capabilities even if the bunker-busters can’t eliminate Iran’s nuclear program. Gen. Martin Dempsey, chairman of the Joint Chiefs of Staff, suggested at the same Pentagon news conference Thursday that airstrikes might be ordered multiple times if Iran tries to build a bomb.

The usual questions present themselves. (1) This is obviously a piece that was spoon-fed to the press. Why now? (2) Who is it targeted at? Iran, or our allies? Or Israel? (3) Is it credible? Does anyone truly believe that Obama will bomb Iran if talks fail? (4) Credible or not, does this kind of saber rattling do more harm than good? Discuss.