More kids are overweight today than in the past, but fewer of them realize it:

A team of researchers at Georgia Southern University found an alarming rise in the lack of self awareness among children and teenagers in the United States. Specifically, way more overweight 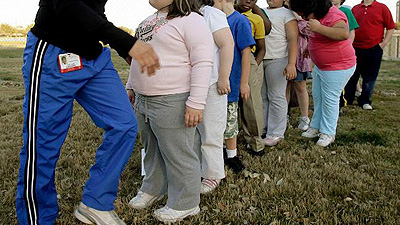 adolescents are oblivious today to the fact that they ought to lose weight than were in decades past—and it’s a big problem.

….Solving the problem isn’t as simple as telling people that they’re overweight. There’s too fine a line between promoting health and facilitating body image issues for that to be the case….”We must be very careful when we, as parents, teachers, or health care professionals, make an effort to correct the misperception among teens,” said Zhang. “It has to be a pro-health, not anti-obesity, campaign.”

This is the place where I always start to get a little uncertain about the whole fat shaming thing. I take it for granted that overweight people should be treated with normal amounts of respect and shouldn’t be harassed about their weight. At the same time, obesity really is bad for you: it’s associated with diabetes, joint deterioration, and depression. As a society, we should try to promote healthy weight, but as individuals we should cool it with the fat jokes. This is a difficult combination to pull off.

And it’s even more important with kids, since childhood obesity is strongly associated with adult obesity. Unfortunately, it’s also harder with kids, since they have less knowledge, less self-control, and less concern with problems in the far future. How do you get them to take healthy weight seriously, but in a way that no one can complain is akin to fat shaming?

Obviously parents have to take a big role in this: if they don’t take healthy eating seriously, neither will their kids. Beyond that, I’m not sure. Ideas?

UPDATE: Aaron Carroll coincidentally reminds us today that not all obesity is created equal. Being mildly overweight has very few health implications. It’s only being seriously overweight that’s truly a problem:

Costs are NOT equally spread over obese individuals. People with class 1 obesity, or those whose BMI is greater than 30 but less than 35, pretty much have no elevated health care costs….The paper further reports that a person who has a starting BMI of 40, and can lose 5% of their weight, might expect to see reductions in health care costs of $2137. But only about 6% of adults have a BMI that high. Losing 5% of weight if you have a starting BMI of 35 would save you $528. Losing that weight if you’re starting with a BMI of 30 would save you $69.

Obviously, being moderately overweight can eventually lead to serious obesity, so it’s not something we should just ignore. Still, it’s true that the vast majority of those we call obese are only modestly overweight and don’t really have any serious health issues because of it. The real goal here is preventing mild overweight from turning into serious obesity.