Anchor babies are back! And back with a vengeance. Yesterday, Jeb Bush unveiled Jeb 2.0, a louder, tougher, more outraged version of himself. Overall, it was a pretty woeful performance—he sounded a lot like a shy teenager practicing toughness in front of a mirror—but along the way he suggested that we needed better enforcement at the border in order to reduce the epidemic of anchor babies. A reporter asked why he used a term that’s considered offensive, and Bush looked like a 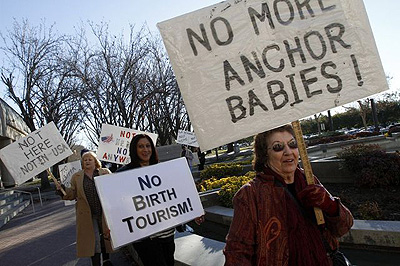 kid who’s just gotten a toy at Christmas, “Do you have a better term? You give me a better term and I’ll use it,” he shot back. Tough! Trumpish!

Ed Kilgore says the worst part of all this is that Republican candidates don’t just use the term, but defend it with “snarling pride.” Well sure. They all want to be Donald Trump. But there’s nothing surprising about this. Republicans ostentatiously use the term “illegals” constantly as a signal that they’re not just conservatives, but conservatives who don’t take any guff from anyone—and certainly not from the PC police.

So no surprises here. But I’m curious about something. Last night I read a longish piece at TNR by Gwyneth Kelly titled “Why ‘Anchor Baby’ Is Offensive.” I was actually sort of curious about that, so I read through it. But all the article did was provide a bit of history about the term and quote a bunch of people saying it was disgusting and dehumanizing. There was no explanation of why it’s offensive.

Don’t everyone pile on me at once. If you don’t ask, you can’t learn, right? So I guess my question is this. Is “anchor baby” offensive because:

I’m probably going to regret asking this. But I am curious. It’s not obvious from first principles what the problem is here.