Menzie Chinn updates us today on how things are going in Sam Brownback’s Kansas. Answer: not so good. The chart on the right compares Kansas to the rest of the country using coincident indexes, an 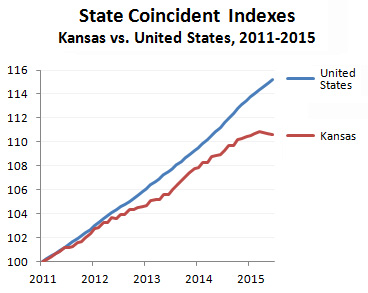 aggregate measure of economic performance tracked monthly by the Philadelphia Fed. It consists of the following four measures:

The index is set to 100 at the beginning of 2011, when Gov. Brownback took office. Brownback instituted an aggressive program of tax cuts and budget reductions, promising that this supply-side intervention would supercharge the state’s economy. But the reality has been rather different. Kansas has underperformed the US economy ever since Brownback was elected.

Why is that? Is the Fed using the wrong employment data? Chinn says no: “The decline shows up regardless of whether employment is measured using the establishment or household surveys.” Is it the weather? “Drought does not seem to be an explanation to me.” How about the poor performance of the aircraft industry? “Evidence from employment data is not supportive of this thesis.”

So what is it? “I would argue much of the downturn especially post January 2013 is self-inflicted, due to the fiscal policies implemented.” Surprise! I wonder if Kansans will ever figure this out?