I have some horrible news about the search for ALS cures:

The breakthrough research unravels the mystery about a protein called TDP-43….In a study of the protein in mice cells….Johns Hopkins scientists detail how TDP-43 — which is supposed to decode DNA — breaks down and become “sticky.”…When the researchers inserted a special protein designed to mimic TDP-43 into the neurons, the cells came back to life and returned to normal. That’s sparked fervent interest that the treatment could possibly be used to slow down or even halt the disease.

It’s a big step for the 15,000 Americans living with ALS, which currently has no cure, usually ends up killing people two to five years after they are diagnosed.

One year ago….the Ice Bucket Challenge had become the viral campaign everyone was talking about — an online effort to raise awareness and funds for amyotrophic lateral sclerosis, better known as ALS or Lou Gehrig’s disease….More than $220 million in donations later, 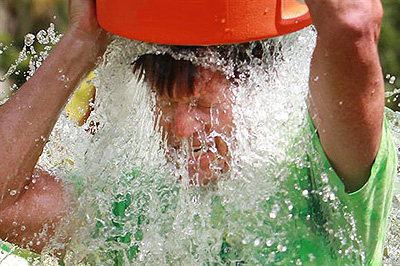 scientists at Johns Hopkins are claiming a major breakthrough in ALS research and are partly crediting the success to the massive influx of public interest.

“Without it, we wouldn’t have been able to come out with the studies as quickly as we did,” said Philip Wong, a professor at Johns Hopkins who led the research team….”The money came at a critical time when we needed it,” Wong said.

But maybe it’s not really so bad. After all, there has to be some kind of limit to annoying internet memes. There are just so many people in the world and so many hours in the day. And if we have indeed reached peak annoyance, the ALS meme added nothing to the total. It merely sucked it away from some other potential annoyance that never took off. It’s sort of like an energy conservation law, except for annoying internet memes.

But….what if we haven’t reached peak annoyance yet? And how would we know? As a wise man once told me, no matter how bad things get, they can always get worse.