From Carolyn Johnson at Wonkblog:

Hey, that’s me! A friendly FedEx delivery person just delivered this month’s $10,000 supply to me an hour ago. So, what’s up?

With some cancer drug prices soaring past $10,000 a month, doctors have begun to ask one nagging question: Do drug prices correctly reflect the value they bring to patients by extending or improving their lives?

A study published Thursday in JAMA Oncology aims to answer that question by examining necitumumab, an experimental lung cancer drug….in a clinical trial, researchers found that 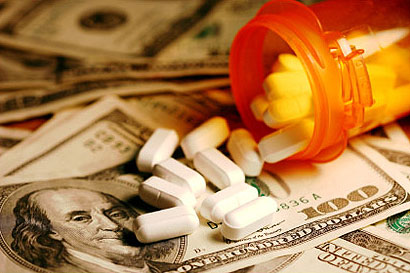 adding the drug to chemotherapy extended life by 1.6 months, on average.

….In order to estimate what the price of this drug “should” be based on its value to patients, the research team modeled various scenarios….one additional year in perfect health in the U.S. is worth somewhere between $50,000 and $200,000….Based on their calculations, the drug should cost from $563 to $1,309 for a three-week cycle.

….There are many variables that go into the price of a drug, but mounting evidence suggests that the value it brings to patients is not the biggest factor. “How they price the drug is they price it at whatever the market is willing to bear,” said Benjamn Djulbegovic, an oncologist at the University of South Florida.

Well, sure, but this raises the question of why the market is willing to bear such high prices. Why would an insurance company approve a large expenditure for a drug that has only a tiny benefit?

There’s a lot that goes into this. Obviously some people benefit from necitumumab by a lot more than 1.6 months—and there’s no way to tell beforehand who will and who won’t. And it costs a lot to develop these drugs. And patients put a lot of pressure on insurers to cover anything that might help. And, in the end, insurance companies don’t have a ton of incentive to push back: if drug prices go up, they increase their premiums. It doesn’t really affect their bottom line much.

There’s also the size of the total market to consider. The chemo drug I’m currently taking, for example, is only used for two conditions. There’s just not a whole lot of us using it. In cases like that, a drug is going to be pretty expensive.

But here’s something I’m curious about: who puts more pressure on insurance companies to cover expensive drugs, patients or doctors? My doctor, for example, was totally gung-ho about my current med. I was much less so after I read some of the clinical studies online. Why? Because most chemo drugs have unpleasant side effects (though mine has turned out OK so far), which means that, like many patients, I’m reluctant to take them unless the benefit is pretty clear cut. Doctors, on the other hand, just want to do whatever they can to help, and have no particular incentive to hold back. So maybe it’s doctors who need to be in the forefront of pushing back on expensive drugs. They’re the ones in the doctor-patient relationship who know the most, after all.