It’s health care day for Scott Walker. Today he released “The Day One Patient Freedom Plan,” a title that’s apparently designed to give the impression that his plan would start on Day One of his presidency. Yuval Levin comments that Walker’s proposal “will be familiar to health wonks,” and it’s true. It’s the usual conservative mish-mash of HSAs, high-risk pools, tax credits, interstate insurance sales, tort reform, and block-granting of Medicaid.

Oh, and Walker’s plan won’t require any tax revenue. This is….a little hard to believe since a quick swag suggests that the gross cost of Walker’s tax credits will run about $200 billion per year. I figure the net cost, once you account for the end of Obamacare 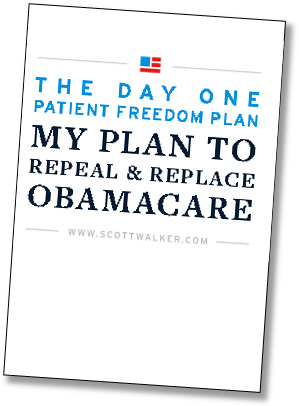 subsidies and other current outlays, is still in the neighborhood of $100 billion or so.1 That’s a lot, so I assume Walker explains pretty carefully how he’s going to pull this off without any new taxes.

Indeed he does. Here’s the answer: “We would simplify and reform how the federal government helps people access health insurance.” Gee, I wonder why no one’s thought of that before?

So far, there’s nothing very interesting here. Every Republican candidate is going to release a plan very similar to this. But there is one other thing I was curious about. It turns out that protecting people with pre-existing conditions is really popular, and this means that Republicans all feel like they have to support the idea. But how? Apologies for the long excerpt, but I want to make sure you see Walker’s whole answer:

No individual should fear being denied coverage, or face huge premium spikes when they get sick and then try to change jobs or insurance plans. My plan would address these concerns. It would make additional reforms to insurance coverage laws to ensure individuals with pre-existing conditions would be protected, not only when moving from employer-based plans to the individual market, but also when switching between plans. This would make insurance coverage more portable, permitting individuals to own their coverage, regardless of how or where they purchase it.

Provided individuals maintain continuous, creditable coverage, no one would see their premiums jump because of a health issue or be shut out of access to affordable health insurance because of a new diagnosis or a pre-existing medical condition. Newborns, as well as young adults leaving their parents’ insurance plans and buying their own, would have these same protections. Unlike the ObamaCare approach, my plan would protect those with pre-existing conditions without using costly mandates. By relying on incentives rather than penalties, individuals would be free to choose.

This is literally a non-answer. We do know a couple of things: (a) if you let your insurance lapse, you’re screwed, and (b) Walker will somehow prevent insurance companies from raising your rates if you maintain continuous coverage. He provides no clue just what kind of insurance regulation would accomplish this, and for a good reason: I doubt there is one. Obamacare accomplishes it via community rating, which requires insurance companies to cover all comers at the same price, but Walker surely rejects this approach. What he replaces it with remains a mystery.

One other thing worth noting: Walker’s tax credits would, at best, pay only for catastrophic coverage. Maybe not even that. Nor will his plan cover everyone. Nor is it likely to cost nothing. Nor does it have any concrete proposals to reduce the cost of health care. If you think that’s OK, then Walker is your guy. If you think everyone should be able to receive affordable routine health care, and you’re willing to pay for it honestly, you might want to stick with Obamacare.

1Don’t worry about the numbers. They’re just illustrative guesses on my part. I’m sure experts will weigh in eventually with better estimates.