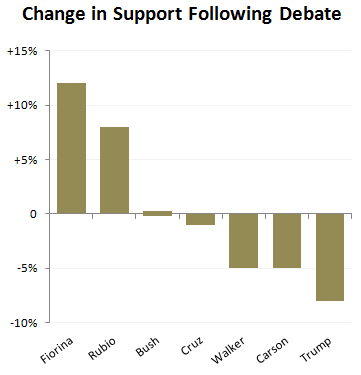 A new CNN/ORC poll shows that there were two clear winners from Wednesday’s debate: Fiorina and Rubio. Trump was the biggest loser. And Scott Walker? I’ll make an exception for him. Not only was he down five points, but he was down five points from his previous level of five percent. In other words, his absolute level of support is now officially zero. This has to be one of the fastest, most dramatic flameouts of a top-tier candidate ever.

Trump, Fiorina, and Carson are now the top three candidates, but I simply don’t give any of them much chance of winning. So the next three are more interesting: Rubio, Bush, and Cruz. Of those, Rubio is not only in the lead, he’s the only one who gained any ground this week. This makes him officially one of the front runners, and should mean that he starts getting a lot more attention. We’ll see whether that’s good or bad for him.