The Center for American Progress—aka “Hillary’s Think Tank”—has released “A New Vision for Child Care in the United States.” But it’s not really very new. It’s just a tax credit that varies with income. If you’re at the poverty level, you’d get a tax credit of about $13,000 paid directly to the child care facility of your choice. If you make more, the tax credit 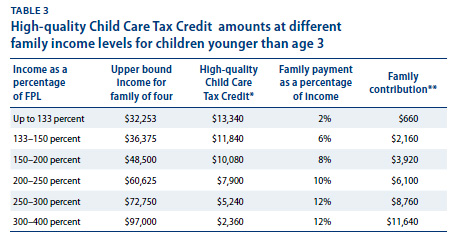 Does this sound familiar? It should: it bears a strong family resemblance to Obamacare.

But it might be a good idea regardless of how new it really is. I’m certainly a fan of both preschool and subsidized child care. The big question is going to be how much it costs, and that’s something the authors don’t address. There’s probably a reason for that. My very rough horseback calculation suggests it could run up a tab of $100 billion per year. Maybe more.1[See update below.]

Needless to say, this is one of the downsides of taking public policy seriously. If you’re Donald Trump, you just tell everyone not to worry. “I’m going to be great for the kids,” and he’ll take care of it from there. But if you’re a Democrat, you normally feel obliged to present an actual plan that can actually work in the real world—and that means people can attach a price to it. And that, in turn, means you can be badgered about how you’re going to pay for it.

Politically speaking, this is something that Democrats will need to be careful about. There’s a temptation among liberals to be the anti-Trump, tossing out dozens of detailed white papers to solve all the world’s problems. But this gives conservatives an opening to add up the cost of all those white papers and start bellowing about how their very own proposals prove that Democrats want to bankrupt the country and tax millionaires into insolvency. It’s best to tread carefully here.

On the other hand, maybe Hillary could benefit from a small dose of Trumpism. Maybe she should adopt CAP’s proposal and just declare that she’s going to soak the rich to pay for it. Why pussyfoot around it? After all, polls show that taxing the rich at higher rates is a pretty popular idea. Maybe it’s time to go bullroar populist and just beat the tar out of the malefactors of great wealth.

Then again, maybe not. That doesn’t really sound much like Hillary, does it?

1The program is for kids aged 0-4. My estimate is based on about 20 million kids qualifying, with an average tax credit in the neighborhood of $8,000 each. That’s $160 billion. If two-thirds of all families take advantage of this tax credit, that comes to about $100 billion. Needless to say, more detailed cost estimates are welcome.

UPDATE: I am mistaken. CAP estimates a cost of $40 billion for their proposal, which they believe would not just help working families, but also stimulate the economy:

The economy as a whole benefits from policies that help working families. As an example, the Canadian province of Quebec developed a nearly universal child care assistance program, and economists at the University of Quebec and the University of Sherbrooke estimate that the program boosted women’s labor force participation by nearly 4 percentage points, which in turn boosted GDP by 1.7 percentage points.

I’m habitually skeptical of claims that social programs will recoup all or part of their costs by boosting the economy, but it’s probably true in this case. The effect of increased employment on GDP is pretty straightforward. The policy question, of course, is how much this will offset the program costs. But then, that’s always the policy question, isn’t it?

In any case, I’m not sure how CAP gets to $40 billion, and it strikes me as a little low. But it might be right. It would be interesting to see an estimate from a reliable third-party source.