Greg Sargent says that Hillary Clinton’s tanking favorability ratings should take no one by surprise. It’s what happens every time an election starts up and she’s once again viewed as a partisan political figure. “Her drop was probably inevitable once she made the transition from Secretary of State — a job that carries the trappings of above-politics statesmanship, or if you prefer, states-womanship — to candidate for president.”

There’s much more at the link, but the annotated chart below pretty much tells the story. When she’s removed from the fray, her unfavorability ratings bounce around between 20 and 40 percent. When she’s involved in an election, they go up to 45-55 percent or even a little higher. The same thing is happening this time around. 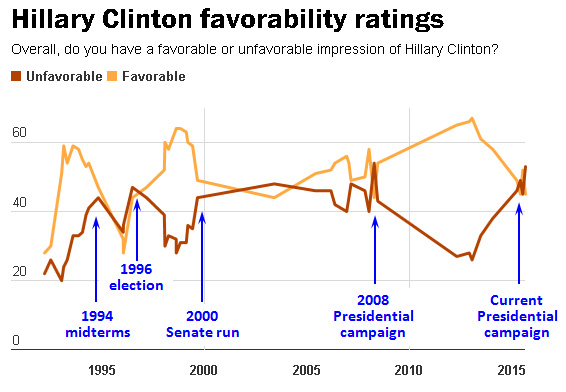