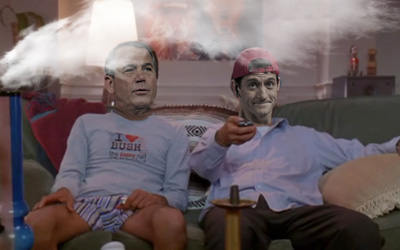 I feel like this is one of those things that maybe you can only truly comprehend after a couple of blunts:

Ryan: But awesome. Insane but still awesome. I mean, seriously, it’s our only defense against, like, total socialism.

And while we’re on the subject, I have another idea. As thousands of people have pointed out, nothing in the Constitution says the Speaker has to be a member of Congress. This has spawned a whole cottage industry of jokes. Donald Trump! Bibi Netanyahu! Rush Limbaugh! But I have another idea: does it have to be one person? Here’s the relevant text:

The House of Representatives shall chuse their Speaker and other Officers….

Sure, “Speaker” is singular in that sentence, but “Speaker and other Officers” suggests that maybe leadership of the House could be shared. How about a triumvirate, like Rome in its glory days? Ryan could be one, some tea party nutcase could be another, and the third could be, um, Mia Love, who’s a black woman and the daughter of immigrants. I’m not sure how they’d make decisions, but I guess they’d figure out something. Maybe rock paper scissors.