Tyler Cowen points us today to an interesting new study about kindergarten. It’s from Denmark, as is so often the case, since the Danes keep very detailed records on their children. 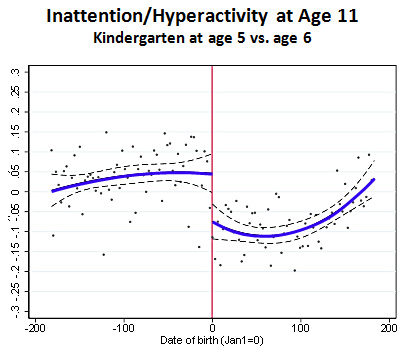 until the following August, when she’s about 6½. There’s a one-year difference between entering kindergarten even though they’re essentially the same age. So how do they do?

The authors find that on a wide range of measures—peer problems, emotional problems, socialization, etc.—the 5½-year-old kid does a little bit worse. However, on the inattention/hyperactivity score, the 5½-year-old kid does a lot worse. There’s a large discontinuity at January 1, which suggests that the one-year difference in entering kindergarten makes a big difference.

Cowen comments, “I have not yet read the study, but it seems to me this paper, along with some other recent results, does not exactly help the case for preschool…” That may be true, but there are two pretty important caveats to keep in mind:

First, there’s no way to tell if the older kids benefit because (a) they’re older in absolute terms, or (b) they’re older than most of their classmates. The authors claim that “our pattern of results speaks indirectly to the empirical salience of absolute and relative-age mechanisms,” but that’s a stretch. In the discussion section at the tail end of the paper they briefly say that their findings “are consistent” with an absolute-age mechanism, but that’s it. There’s nothing in the actual body of the paper that addresses this in any way.

Second, nearly all Danish children attend nurseries and public daycare starting at age one. So even if it turns out there’s evidence for an absolute age mechanism, it may only be something specific to the curriculum of kindergarten, not to early schooling in general.

So it’s an intriguing paper, but it’s not at all clear that it tells us much about the benefits of early daycare/preschool. The authors are keen on a theory that young children benefit from pretend play, and they suggest that kindergarten at age five cuts this period of pretend play too short. That could be, but again, this mostly just argues for delaying the start of structured learning, not against the idea of early preschool. More research, please.