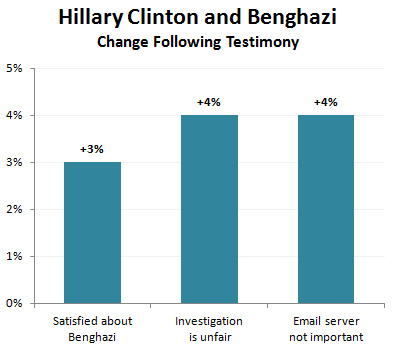 A new NBC/Wall Street Journal poll suggests that Hillary Clinton’s testimony before the Benghazi committee was pretty successful. More people are satisfied about her account of Benghazi. More people think the continuing investigation is unfair. And more people think her email server is not an important issue.

The changes aren’t huge, and I imagine there’s a hard base of around 35 percent who will go to their graves believing that these are indisputable examples of her unfitness to serve as president. But these are mostly the same people who think Bill Clinton spent his presidency dealing dope out of Mena airport, so there’s not much chance of influencing them in the first place.

In other good news for Hillary, she leads Bernie Sanders by 62-31 percent, while a whopping 84 percent think she’s most likely to win the nomination. Apparently only about a third of Bernie’s supporters actually think he has much of a chance to win.