In the previous post, I called Marco Rubio the next human piñata in the Republican primary. On Twitter I got called out for this: “I think we can all agree that describing Hispanics as ‘pinatas’ is offensive.”

Ralph Nader is mad at Janet Yellen for keeping interest rates low, so he wrote her an open letter suggesting that she sit down with her “Nobel Prize winning husband, economist George Akerlof, who is known to be consumer-sensitive.”  Jordan Weissmann called out Nader: “Yes, 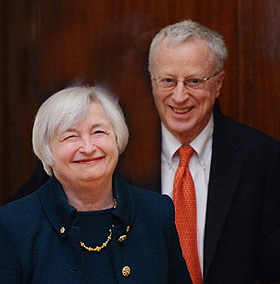 Ralph Nader just told the most powerful woman in the world to take more tips from her husband.”

Neither of these is a big deal. Still, it’s way past time to knock it off. “Piñata” is a common term for anyone who’s getting beat up, Hispanic or otherwise. And Nader wants Yellen to talk to Akerlof because he thinks Akerlof agrees with him, not because Akerlof is Yellen’s husband.

I wouldn’t care so much about this except that I think it does real harm to the cause of fighting racism and sexism. In bigger doses it makes us all look silly, and provides an endless series of excuses for ordinary folks to get exasperated at us and for conservatives not to take any of it seriously. We really need to stop this. If conservatives want to be offensive, at least make them work for excuses to ignore those of us who care about this stuff. We’re making it too easy for them.