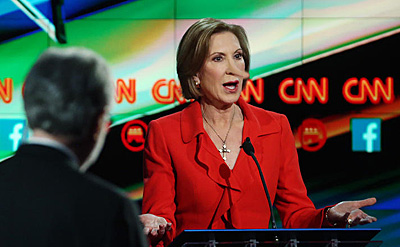 One of the things I would immediately do, in addition to defeating them here at home, is bring back the warrior class—Petraeus, McChrystal, Mattis, Keane, Flynn. Every single one of these generals I know. Every one was retired early because they told President Obama things that he didn’t want to hear.

In real time, I mentioned that David Petraeus wasn’t “retired early” because he told Obama something he didn’t want to hear. He resigned after it was discovered that he was having an affair. And how about Jack Keane? Here’s what he said on Fox Business:

STUART VARNEY: Did you in fact, general, give advice to President Obama, which he didn’t want to hear and didn’t take?

McChrystal, of course, famously resigned after he and his aides trashed a bunch of civilian officials in the pages of Rolling Stone.

Remarkably, though, Mattis and Flynn really did have disagreements with the White House. So Fiorina was 40 percent right. That kind of dedication to accuracy explains a lot about her tenure at Hewlett-Packard, I guess.

And as long as we’re on the subject of explicit lies, how about Donald Trump doubling down on his claim that he “strongly” opposed the Iraq War? Why is it that none of the other candidates have ever called him on that? Are they really that afraid of him?