A reader draws my attention to some “@kdrum bait” by Chris Mooney in the Washington Post today. Mooney writes about a new study that investigates violent crime upwind and downwind of interstate highways in 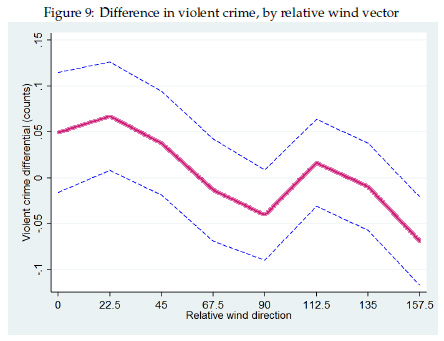 ….We estimate that the downwind side of interstates experience 2.2 percent more violent crimes than when the wind is blowing in the opposite direction. Although we estimate that the effect of pollution on crime is modest in magnitude, our conservative back-of-the-envelope calculations suggest that the cost of mobile pollution-induced crime in the United States is on the order of $100-200 million annually.

Of course, this isn’t really Kevin bait. Needless to say, I would expect higher crime rates downwind of urban highways because of lead emissions. However, this is an effect over the very long term. If you were born in a high-emission area during the era between 1950-1980 or so, you’re likely to suffer from lead poisoning that leads to a greater propensity for crime when you grow up. This explains the long-term rise and fall of violent crime over the past five or six decades.

However, this paper literally looks at violent crime rates from day to day. The authors conclude that, just as crime goes up during hot weather, it also goes up when pollution levels are higher. If this is true, it suggests that exposure to tailpipe pollutants has some kind of immediate, transient effect.

Why? The authors suggest several mechanisms. Pollution may have a direct effect on brain chemistry. Or it may simply be unpleasant and annoying, which can trigger aggressive behavior. Or it may have an effect on how many people are outdoors, which might indirectly affect the crime rate in some way. Since this is a brand new finding, it’s hard to say. Obviously it needs to be confirmed, and more research is needed before we understand the causal mechanism.