It is, of course, normal for Republicans to claim that Democrats have screwed everything up and vice versa. That’s what political parties do. But as I (and many others) have noted before, it’s remarkable just how apocalyptic Republicans are this year. Listening to the GOP debate last night, you might have barely avoided slitting your own throat in despair over the destruction of a once-great country that we’ve all witnessed over the past seven years.

As a public service, I figured I would collect the most ominous statement from each candidate last night. Obviously this is a judgment call in some cases, since there were so many to choose from. But there’s also a surprise. Here are my choices:

Bush: The idea that somehow we’re better off today than the day that Barack Obama was inaugurated president of the United States is totally an alternative universe. The simple fact is that the world has been torn asunder.

Carson: You know, when you go into the store and buy a box of laundry detergent, and the price has gone up — you know, 50 cents because of regulations….And everything is costing more money, and we are killing our people like this….It’s the evil government 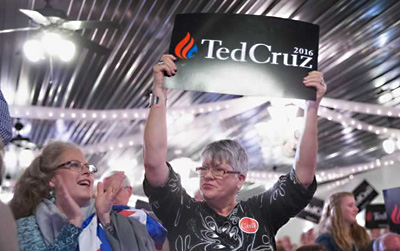 that is putting all these regulations on us so that we can’t survive.

Trump: Our military is a disaster. Our healthcare is a horror show….We have no borders. Our vets are being treated horribly. Illegal immigration is beyond belief. Our country is being run by incompetent people….Those two young people — those two horrible young people in California when they shot the 14 people….Many people saw pipe bombs and all sorts of things all over their apartment. Why weren’t they vigilant? Why didn’t they call? Why didn’t they call the police?…We have to find out — many people knew about what was going on. Why didn’t they turn those two people in so that you wouldn’t have had all the death? There’s something going on and it’s bad. And I’m saying we have to get to the bottom of it.

Kasich: In this country, people are concerned about their economic future. They’re very concerned about it. And they wonder whether somebody is getting something to — keeping them from getting it. That’s not the America that I’ve ever known.

And the surprise? There’s nothing on this list from Ted Cruz. He had plenty of criticisms of Obama, but I looked at everything he said last night and there was really no hint of America going to hell in a handbasket. I didn’t expect that, but I’ll bet it’s deliberate. Maybe he knows something the rest of field doesn’t?