Remember that old chestnut, the climate chart that starts in 1998 and makes it look like climate change has been on a “pause” ever since? It was always nonsense produced by cherry picking an unusually high starting point, but it was 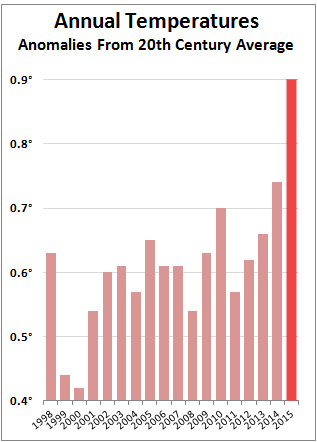 still effective propaganda. But those days are gone for good. 2014 was already considerably warmer than 1998, and last year has now blown away everything in the record books:

During 2015, the average temperature across global land and ocean surfaces was 1.62°F (0.90°C) above the 20th century average….This is also the largest margin by which the annual global temperature record has been broken. Ten months had record high temperatures for their respective months during the year. The five highest monthly departures from average for any month on record all occurred during 2015.

George Will is now going to have to find some other way to lie about global warming. I don’t doubt that he’s up to it, but at least he’ll have to work a little harder.