In an apparent effort to prove that you can do data journalism on literally any topic, Leah Libresco examines the merchandising bonanza of the latest Star Wars movie: 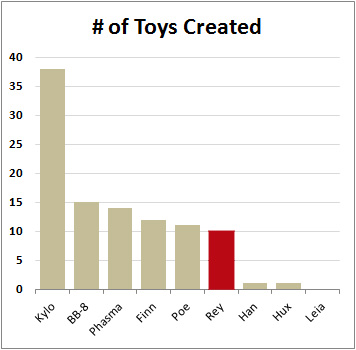 the “#WheresRey” hashtag…. The controversy reached its climax when Hasbro, the maker of the game, said Rey will be represented in new editions.

To see whether Rey’s absence was local to Monopoly or more widespread across all “Force Awakens” toys, I did what any sensible data journalist would do: I went to a toy store. Well, a digital one. Toys R Us lists 256 toys in their online “Force Awakens” store, but only 70 of them include any of the major characters introduced in the new movie. Rey holds her own among this group.

“Rey holds her own”? I guess so. She and Finn are the main heroes of the movie, and they’re pretty close in the toy competition. The real news here is a clear anti-human bias: the biggest toy winners are Kylo and Captain Phasma, who spend most or all of the movie in masks, and BB-8, a droid so calculatingly adorable as to bring back involuntary memories of Ewoks.

Anyway, as long as we’re on the subject, you’ve probably all been waiting on the edges of your seats wondering what I thought of the movie. Well, the first week it was too crowded, so I didn’t go. I’m too old for standing in line. The next week, the kids were still out of school, and a friend was visiting who had no interest in the movie. The next week, my mother’s car broke, so I loaned her mine and had no way to get to the theater. By the time I got my car back, I had come down with a cold and didn’t feel like going. So it wasn’t until yesterday that I finally I saw it.

And I was stunned. I was prepared for anything from bad to pretty good, but it turned out to be stultifyingly boring. There’s nothing “wrong” with SWTFA. The acting is OK. The dialog is OK. The effects are OK. The pacing is OK. The direction is OK. The editing is OK. The characters are OK. As a piece of craft, it’s fine. But when you put it all together it’s two hours of nothing. And yet, the residents of Earth have spent a billion dollars on tickets! What the hell is wrong with you people?

The movie’s big mystery, of course, is “Who is Rey?” The answer is, “Who cares?” Here’s my guess: she’s a clone constructed from a preserved pubic hair of Obi-Wan Kenobi. We’ll find out in the exciting sequel!

And now for the worst part. I never thought it was possible I’d say this, but I have marginally more respect for George Lucas’s prequels now. They may have sucked, but at least he tried.