The LA Times reports today that when Bernie Sanders talks about racial issues, he tends to focus on black incarceration rates:

At campaign events, he labels a national embarrassment the rate at which America imprisons black men — a rate that exploded under the 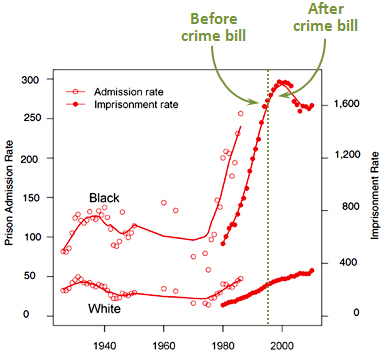 The Times presents this claim without evidence. It is, apparently, now in the same category as the sun rising in the east and cigarettes causing lung cancer. It just is.

Except that it isn’t. We don’t have formal historical records of incarceration rates by race, but there are plenty of good estimates. The National Academies of Science produced one as part of its recent report, The Growth of Incarceration in the United States, and you can see it on the right (it includes both state and federal prisoners). The incarceration rate for blacks is indeed a national scandal, but not one that was affected one way or the other by the 1994 crime bill. There were plenty of problems with that bill, and it’s perfectly all right to loathe it. But it had almost no effect on mass incarceration in general, nor did it affect black incarceration rates more than slightly.