Stephen Prothero has a very odd piece in the LA Times today:

Two surprising conclusions emerge when America’s culture wars — from Jefferson’s heresies to same-sex marriage — are stacked up and weighed together. Conservatives typically start the battles, and liberals almost always win them.

Conservatism is often said to be rooted in a commitment to states’ rights, free markets and limited government. But American conservatives have been for and against all these things at various times. The more consistent 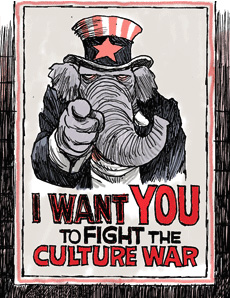 idea behind American conservatism is cultural: a form of life is passing away and it is worth fighting to revive and restore it. Driven by this narrative of loss and restoration, culture warriors struggle to resurrect the patriarchal family or Christian America or the homogeneous hometown.

Conservatives typically lose these battles because the causes they select are lost from the start. For example, culture warriors took on Catholics when the Catholic population was mainstreaming and gaining power. They took on same-sex marriage when many gays and lesbians were already out of the closet and accepted by their heterosexual relatives, co-workers and neighbors.

This is backward. Almost by definition—as Prothero acknowledges—conservatives want to keep existing cultural mores in place. It’s liberals who want to change them. Same-sex marriage is a typical case: the United States spent 200 years unanimously believing that it was too absurd even to contemplate. It was gay rights activists, eventually supported by mainstream liberals, who pushed it into the public sphere. Conservatives didn’t fight it before then because there was nothing to fight.

This dynamic isn’t quite universal. The temperance movement, which was generally conservative though a little hard to classify, tried to change a custom that was millennia old. Much more commonly, though, it’s liberals who fight for cultural change. In the postwar era, we’re the ones who started the fights over civil rights; gender equality; prayer in school; abortion; gay rights; voting rights; health care as a basic right; and many others.

Prothero basically says that conservatives take on these movements too late, only after they’ve already started to gain critical mass. That’s why they lose. This is true, but how else could it be? There’s no point in waging a war against something that has no mainstream support and isn’t even a twinkle in the public eye.

And of course, conservatives don’t always lose. Liberals have tried to change the culture around guns, and so far we’ve failed miserably. Drug legalization has made only minuscule progress. And after 70 years, we’re still fighting for truly universal health care.

Nonetheless, the general principle is simple: Liberals start culture fights, and conservatives respond if it looks like we’re starting to succeed. Beyond being the simple truth, it’s also something liberals should be proud of. There’s a lot of enduring unfairness in society, and the main reason I count myself a liberal in the first place is because we’re the ones who fight like hell to bring public attention to this and work to change it. Why would any liberal not gladly accept this?