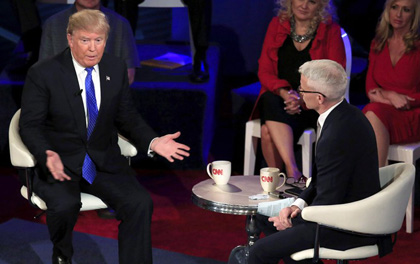 The depth of Donald Trump’s ignorance is inexplicable. Seriously. How is it that after nine months of campaigning he still knows less about most subjects than your average guy in a bar working on his fourth beer?

At the CNN town hall last night, an audience member asked Trump, “In your opinion, what are the top three functions of the United States government?” That’s not a bad question. I think that pretty much every presidential candidate will say that national security is No. 1, but there are plenty of good choices for the next two. Protecting the environment. Keeping taxes low. The social safety net. Protecting religious liberty. Climate change. Gun rights. Creating jobs. Etc.

But watching last night, it was obvious that Trump had no idea what to say. So after mentioning national security, he paused a bit and then decided on health care and education. This produced incredulity from Anderson Cooper:

COOPER: Aren’t you against the federal government’s involvement in education? Don’t you want it to devolve to states?

TRUMP: I want it to go to states, yes. Absolutely. I want—right now…

COOPER: So that’s not part of what the federal government’s…

TRUMP: The federal government, but the concept of the country is the concept that we have to have education within the country, and we have to get rid of Common Core, and it should be brought to the state level.

COOPER: And federal health care run by the federal government?

TRUMP: Health care—we need health care for our people. We need a good—Obamacare is a disaster. It’s proven to be…

COOPER: But is that something the federal government should be doing?

In his panic to pick two subjects—any two subjects—Trump managed to light on precisely the two that every conservative in the country thinks the federal government shouldn’t have a role in. So then Trump fumbles around and starts talking about “the concept of the country” that we have to have education. Brilliant! And Common Core has to be “brought to the state level,” because apparently Trump has no idea that Common Core has been a state program from the very start.

Then we get to health care. “We need health care for our people,” but it should be privately supplied even if the government leads it. This, of course, is precisely what Obamacare is: a program that coordinates and regulates health care provided by private suppliers. But apparently Trump doesn’t know that either.

I know that mocking Trump for his policy ignorance is sort of boring. I mean, what else is new? But is it possible that he’s actually getting dumber over time? Out of every possibility available to him, he managed to pick possibly the worst two for any conservative.

It’s obvious that Trump not only resists the idea of being briefed about anything, but actively tries to avoid learning anything about the government. Just by accident you’d learn more than this just by running for president. What’s the deal here?