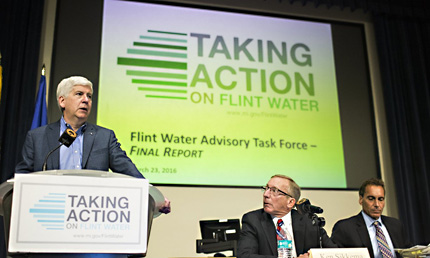 A task force appointed by Michigan Governor Rick Snyder has issued its final report on the Flint water crisis. Here’s the executive summary:

The Flint water crisis is a story of government failure, intransigence, unpreparedness, delay, inaction, and environmental injustice. The Michigan Department of Environmental Quality (MDEQ) failed in its fundamental responsibility to effectively enforce drinking water regulations. The Michigan Department of Health and Human Services (MDHHS) failed to adequately and promptly act to protect public health. Both agencies, but principally the MDEQ, stubbornly worked to discredit and dismiss others’ attempts to bring the issues of unsafe water, lead contamination, and increased cases of Legionellosis (Legionnaires’ disease) to light. With the City of Flint under emergency management, the Flint Water Department rushed unprepared into full-time operation of the Flint Water Treatment Plant, drawing water from a highly corrosive source without the use of corrosion control.

Though MDEQ was delegated primacy (authority to enforce federal law), the United States Environmental Protection Agency (EPA) delayed enforcement of the Safe Drinking Water Act (SDWA) and Lead and Copper Rule (LCR), thereby prolonging the calamity. Neither the Governor nor the Governor’s office took steps to reverse poor decisions by MDEQ and state-appointed  emergency managers until October 2015, in spite of mounting problems and suggestions to do so by senior staff members in the Governor’s office, in part because of continued reassurances from MDEQ that the water was safe. The significant consequences of these failures for Flint will be long-lasting. They have deeply affected Flint’s public health, its economic future, and residents’ trust in government.

The Flint water crisis occurred when state-appointed emergency managers replaced local representative decision-making in Flint, removing the checks and balances and public accountability that come with public decision-making. Emergency managers made key decisions that contributed to the crisis, from the use of the Flint River to delays in reconnecting to DWSD once water quality problems were encountered. Given the  demographics of Flint, the implications for environmental injustice cannot be ignored or dismissed.

The report contains 36 findings, three of which relate to the EPA:

Based on what I’ve read, this strikes me as fair. The vast bulk of the report’s findings relate to failures of the state and local agencies that had primary responsibility for Flint’s water, but the EPA probably deserves 5-10 percent of the blame. As the report suggests, they showed too much deference to MDEQ and tolerated its “intransigence” more than they had to.

For the most part, I think EPA chief Gina McCarthy was right when she said that EPA’s actions were constrained by law—laws explicitly written by Congress to devolve most enforcement power to the states. At the same time, I think we all know that rules can be bent when the need is urgent enough, and that should have been the case here. Bottom line: EPA shares some of the blame for the water crisis in Flint, but the vast majority of the blame belongs to the state of Michigan and the city of Flint.