I mentioned earlier that I’d probably write a few more posts about Jeffrey Goldberg’s essay on President Obama’s approach to foreign affairs. Here’s the first. It’s all about how Obama views Saudi Arabia:

Though he has a reputation for prudence, he has also been eager to question some of the long-standing assumptions undergirding traditional U.S. foreign-policy thinking….He has [] questioned, often harshly, the role that America’s Sunni Arab allies play in fomenting anti-American terrorism. He is clearly irritated that foreign-policy orthodoxy compels him to treat Saudi Arabia as an ally….For Obama…the Middle East is a region to be 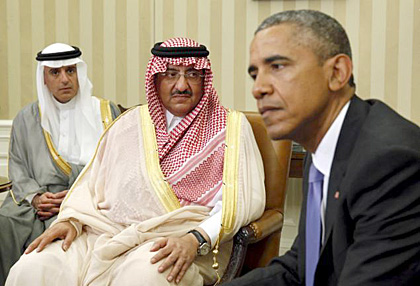 avoided—one that, thanks to America’s energy revolution, will soon be of negligible relevance to the U.S. economy.

….Though he has argued, controversially, that the Middle East’s conflicts “date back millennia,” he also believes that the intensified Muslim fury of recent years was encouraged by countries considered friends of the U.S. In a meeting during APEC with Malcolm Turnbull, the new prime minister of Australia, Obama described how he has watched Indonesia gradually move from a relaxed, syncretistic Islam to a more fundamentalist, unforgiving interpretation; large numbers of Indonesian women, he observed, have now adopted the hijab, the Muslim head covering.

Why, Turnbull asked, was this happening? Because, Obama answered, the Saudis and other Gulf Arabs have funneled money, and large numbers of imams and teachers, into the country. In the 1990s, the Saudis heavily funded Wahhabist madrassas, seminaries that teach the fundamentalist version of Islam favored by the Saudi ruling family, Obama told Turnbull. Today, Islam in Indonesia is much more Arab in orientation than it was when he lived there, he said.

Obama’s patience with Saudi Arabia has always been limited….In the White House these days, one occasionally hears Obama’s National Security Council officials pointedly reminding visitors that the large majority of 9/11 hijackers were not Iranian, but Saudi—and Obama himself rails against Saudi Arabia’s state-sanctioned misogyny, arguing in private that “a country cannot function in the modern world when it is repressing half of its population.”

….Obama has come to a number of dovetailing conclusions about the world, and about America’s role in it. The first is that the Middle East is no longer terribly important to American interests. The second is that even if the Middle East were surpassingly important, there would still be little an American president could do to make it a better place.

Oh man, do I love this guy. I understand why he can’t say stuff like this in public, but I sure wish he’d get drunk one night and blast it out as a tweetstorm. Goldberg acknowledges that the Saudis don’t trust Obama, and the reason is that they shouldn’t. Obama understands very clearly that their only real interest is in getting America to fight the kingdom’s tribal wars for it, all the while funding a brand of fundamentalist Islam that’s inherently unfriendly to the US and the West. America gets virtually nothing out of this relationship except a few military bases—which are only there to help us protect the Saudis.

Obama is no isolationist—far from it, as Goldberg makes clear. And yes, his “Spockian” personality can sometimes make his assessments seem cold and distant. But he’s basically right. The Middle East is, in his words, a “shit show,” and that’s not going to change any time soon. It’s going to be the source of a lot of wars and a lot of innocent deaths over the next few decades. If there was anything we could do about this, intervention might be worthwhile on a pure humanitarian basis even if it did little for America’s interests.

But we can’t. We failed in Lebanon. We failed in Iraq. We’re failing in Afghanistan. We failed in Libya. No matter how cold and distant it seems, there’s simply no reason for America to expend vast resources on an impossible task urged on us by a bunch of putative allies who are only interested in using us as a mercenary army. We should protect ourselves against the export of terrorism from the region—which might sometimes require a military solution—but that’s about it. It’s far past time to ratchet down our engagement in the region and let other countries take the lead if they really want to.