Bernie Sanders is headed to the Vatican:

Whether or not the pope shares the Vermont senator’s enthusiasm for Eugene Debs, he’s “feeling the Bern” enough to have invited the Jewish presidential candidate to speak at the Pontifical Academy of Social Sciences, during a conference on social, economic, and 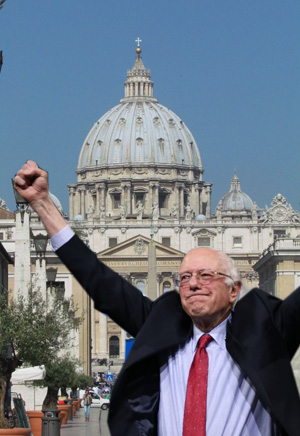 environmental issues. Sanders will head to Rome immediately after the April 14 Democratic debate in Brooklyn.

But apparently the Pontifical Academy of Social Sciences is decidedly not feeling the Bern:

Democratic presidential candidate Bernie Sanders reached out to obtain his invitation to the Vatican and showed “monumental discourtesy” in the process, a senior Vatican official said.

“Sanders made the first move, for the obvious reasons,” Margaret Archer, president of the Pontifical Academy of Social Sciences, which is hosting the conference Sanders will attend, said in a telephone interview. “I think in a sense he may be going for the Catholic vote but this is not the Catholic vote and he should remember that and act accordingly—not that he will.“

Huh. I wonder what Bernie did to piss off Margaret Archer? Maybe it has something to do with his views on conflation:

…In contradistinction Archer offers the approach of analytical dualism. While recognizing the interdependence of structure and agency (i.e. without people there would be no structures) she argues that they operate on different timescales. At any particular moment, antecedently existing structures constrain and enable agents, whose interactions produce intended and unintended consequences, which leads to structural elaboration and the [etc. etc.]

Does that help? No? Sorry about that. I guess someone will have to ask Archer just what Bernie did that was so monumentally discourteous. Was it merely asking for an invitation in the first place? Is it the fact that Bernie is pro-choice? Or something more? We need someone to dig into the Vatican gossip machine and let us know.

UPDATE: Apparently this is all part of some vicious infighting among the Vatican’s social scientists:

U.S. Democratic presidential candidate Bernie Sanders was invited to speak at an April 15 Vatican event by the Vatican, a senior papal official said on Friday….He said it was his idea to invite Sanders.

A Bloomberg report quoted Margaret Archer, president of the Pontifical Academy of Social Sciences, as saying that Sanders had broken with protocol by failing to contact her office first. “This is not true and she knows it. I invited him with her consensus,” said [Monsignor Marcelo Sanchez] Sorondo, who is senior to Archer.

An invitation to Sanders dated March 30, which was emailed to Reuters, was signed by Sorondo and also included Archer’s name.