Who says Broadway musicals are a dying art form?

Treasury Secretary Jack Lew on Wednesday will announce plans to both keep Alexander Hamilton on the front of the $10 bill and to knock Andrew Jackson off the front of the $20 in favor of Harriet Tubman, sources tell POLITICO.

….Lew’s reversal comes after he announced last summer that he was considering replacing Hamilton on the $10 bill with a woman. The plan drew swift rebukes from fans of Hamilton, who helped create the Treasury Department and the modern American financial system….Supporters 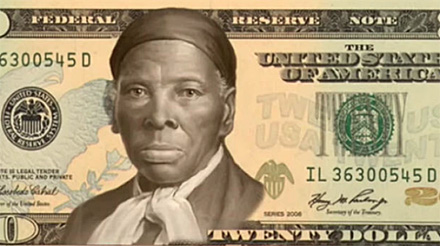 of putting a woman on the $10 bill have complained that it will take too long to put a woman on the $20 bill. But people familiar with the matter said new designs for the bills should be ready by 2020. Treasury is likely to ask the Federal Reserve, which makes the final decision, to speed the process and get the bills into circulation as quickly as possible.

The movement to keep Hamilton on the $10 bill gathered strength after the Broadway musical named after the former Treasury Secretary and founding father became a runaway smash hit.

I still wish Lew had chosen Frances Perkins, since I like the tradition of portraying people on currency who have served in office, but that’s just a personal thing. (Though I do admire Perkins greatly, and think she deserves more attention than she usually gets.) Still, it’s hard to argue with Tubman—or with any of dozens of other women. When you’re going from zero to one, there are a whole lot of worthy choices.

And it’s also nice to see that they can manage to put a new bill in circulation by 2020 after all. I mean, 2030? Seriously? How can it take 15 years to design a new bill and start shipping it to banks?

POSTSCRIPT: There’s a bit of irony here. The $20 bill is ubiquitous largely because that’s what ATMs have been spitting out since the late 70s. But a twenty today is worth less a ten back then. We really ought to be using $50 bills as our go-to walking-around currency these days, and that’s what ATMs should be churning out. By 2020, maybe they will be. And by 2025 cash will probably have disappeared entirely. So by the time Tubman finally makes it onto the twenty, we won’t be using them much anymore. Women just can’t catch a break.