The boffins at the American Enterprise Institute have created an online tool that allows you to investigate the effects of various kinds of tax policy. This sounds like a lot of fun, though I haven’t tried it out myself. But Jim Tankersley has:

To break it in, one of AEI’s economists, Alex Brill, used the Center’s modeling tools to probe our question about middle-class tax relief. He compared several proposals, taken from the current presidential campaign, to see which ones helped the most middle-class taxpayers.

….Brill examined three methods of reducing taxes for middle-income filers, each of which would amount to about a $95 billion tax cut in its first year. One would double the standard deduction that Americans are allowed to claim on their income taxes. One would expand the 10 percent tax bracket to allow more income to be taxed at that low rate, and one would expand the 15 percent tax bracket for the same reason. (Under our progressive income tax system, your income — minus deductions — is taxed at 10 percent for the first chunk of money you earn, and then the next chunk is taxed at 15 percent, and 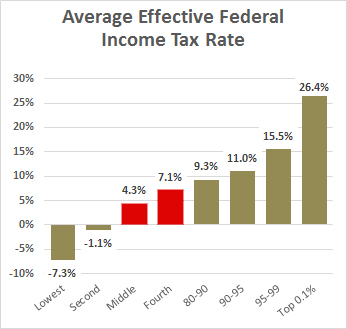 so on, up to a top rate of nearly 40 percent for the highest-earning filers.)

There’s a big problem with this: Middle-class Americans barely pay any federal income tax as it is. They’re on the hook for payroll taxes, and they pay a smallish share of various other federal taxes (corporate taxes, excise taxes, etc.), but income taxes? The chart on the right is taken from data compiled by the Tax Policy Center, and it’s pretty clear: the average middle-class taxpayer forks over only 4.3 percent of their earnings each year on their Form 1040. Even upper-middle-class taxpayers pay less than 10 percent. You have to get to an income above $200,000 before you pay even 15 percent.

Needless to say, most Americans have no clue about this. If you ask someone in the middle, they probably figure they’re paying 20 percent or more in income tax. This is what gives groups like the tea partiers such power: they’re convinced that they already pay mind-boggling rates of income tax that are then thrown away by corrupt politicians on welfare programs for the undeserving. But they don’t. Most of them barely pay a dime for these programs.

There are several takeaways from this:

Thus endeth our federal income tax lesson for the day.