Are voters really angry this year? The Associated Press says no:

All that talk of an angry America?

An Associated Press-GfK poll finds that most Americans are happy with their friends and family, feel good about their finances and are more or less content at work. It’s government, particularly the federal government, that’s making them see red. 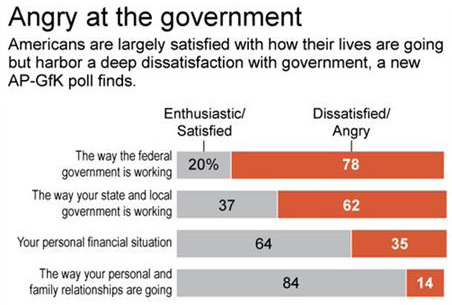 Hmmm. People are generally pretty happy with their finances and their personal lives, but they’re really pissed off at the federal government. We’ve seen this dynamic before. Here’s a long-term look at polling data from the Washington Post:

Take your pick. Maybe it’s a combination of things. But the bottom line seems fairly simple: there’s voluminous data suggesting that, in general, Americans are fairly happy with their personal finances and fairly happy with their lives in general. As happy as they’ve ever been, anyway. But they’re pretty pissed off at the federal government. If there’s anything interesting to be said about voter anger, this is the puzzle to focus on.