In the New York Times Magazine this week, David Samuels has a long profile of Ben Rhodes, the chief messaging guru for foreign affairs in the White House. Generally speaking, Rhodes seems like my kind of guy, but what’s most interesting 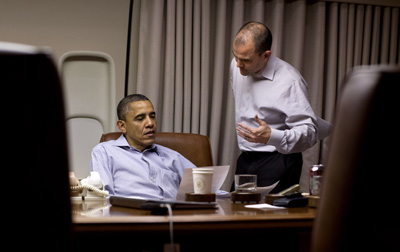 about the profile isn’t really Rhodes himself, but his take on modern journalism. For example:

It is hard for many to absorb the true magnitude of the change in the news business — 40 percent of newspaper-industry professionals have lost their jobs over the past decade….Rhodes singled out a key example to me one day, laced with the brutal contempt that is a hallmark of his private utterances. “All these newspapers used to have foreign bureaus,” he said. “Now they don’t. They call us to explain to them what’s happening in Moscow and Cairo. Most of the outlets are reporting on world events from Washington. The average reporter we talk to is 27 years old, and their only reporting experience consists of being around political campaigns. That’s a sea change. They literally know nothing.”

Or this on how to spin the news:

Ned Price, Rhodes’s assistant, gave me a primer on how it’s done. The easiest way for the White House to shape the news, he explained, is from the briefing podiums, each of which has its own dedicated press corps. “But then there are sort of these force multipliers,” he said, adding, “We have our compadres, I will reach out to a couple people….And I’ll give them some color,” Price continued, “and the next thing I know, lots of these guys are in the dot-com publishing space, and have huge Twitter followings, and they’ll be putting this message out on their own.”

….In a world where experienced reporters competed for scoops and where carrying water for the White House was a cause for shame, no matter which party was in power, it was much harder to sustain a “narrative” over any serious period of time. Now the most effectively weaponized 140-character idea or quote will almost always carry the day, and it is very difficult for even good reporters to necessarily know where the spin is coming from or why.

[Rhodes] developed a healthy contempt for the American foreign-policy establishment, including editors and reporters at The New York Times, The Washington Post, The New Yorker and elsewhere, who at first applauded the Iraq war and then sought to pin all the blame on Bush and his merry band of neocons when it quickly turned sour. If anything, that anger has grown fiercer during Rhodes’s time in the White House. He referred to the American foreign-policy establishment as the Blob. According to Rhodes, the Blob includes Hillary Clinton, Robert Gates and other Iraq-war promoters from both parties who now whine incessantly about the collapse of the American security order in Europe and the Middle East.

….Barack Obama is not a standard-issue liberal Democrat. He openly shares Rhodes’s contempt for the groupthink of the American foreign-policy establishment and its hangers-on in the press. Yet one problem with the new script that Obama and Rhodes have written is that the Blob may have finally caught on.

The Blob “catching on” means that a lot of members of the foreign policy establishment have decided that maybe they don’t like Obama so much after all. He’s just too unwilling to send in the military when there’s a problem somewhere. At least, that seems like their big complaint to me.

Anyway, the whole thing is worth a read—not so much for what it says about Rhodes or Obama, but for what it says about the news business circa 2016. In a way, nothing has changed: presidents always try to shape the news, and they use whatever tools are at hand in their particular era. But in another way, everything has changed. It’s not just the tools that have changed this time, it’s the entire press corps.