This year’s general election for the California Senate seat being vacated by Barbara Boxer will feature no Republicans: The top vote-getters in our open primary were a pair of Democrats, Attorney General Kamala Harris and Rep. Loretta Sanchez. This is a historic result, but to get a real feel for the depth of the GOP’s debacle, take a look at this deceptively simple chart: 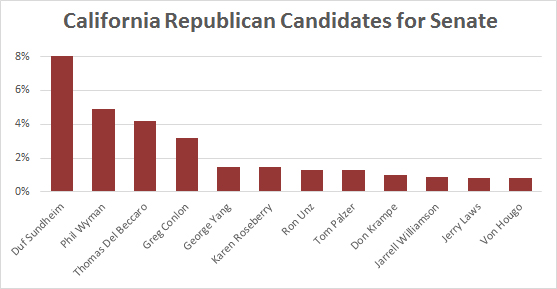 This tells you so much. The GOP’s only hope was to unite on a single candidate; instead they ended up with a field of 12, mostly crackpots and no-hopers. Why? Partly because it doesn’t cost much to qualify for a Senate race in California, and there were a lot of people who thought it would be amusing to be on the ballot. But it’s also because the party is such a joke that it has virtually no influence anymore, even over its own members.

What else does this chart tell us? These 12 candidates won a cumulative total of 29.4 percent of the vote. Not even a third. The top vote-getter, Duf Sundheim, was a complete unknown: a former state GOP chairman with no experience in office of any kind.

Why didn’t anyone with more name recognition run? Largely because the California GOP no longer has anyone with any name recognition. They’re completely shut out of statewide office and hold only about a third of the seats in the legislature. Only two cities of any size have Republican mayors (San Diego and Fresno), and they’re both unknown in the rest of the state.

But there are still a few GOP members of Congress who have enough stature to command an occasional TV camera (Kevin McCarthy, Darrell Issa, Duncan Hunter). Why didn’t any of them run? Because in 2010 they watched Meg Whitman flush $144 million of her personal fortune down the toilet running for governor and Carly Fiorina do the same with $7 million in the Senate race, and the results were grim: Fiorina lost by ten points and Whitman lost by 13 points. Even candidates only loosely associated with the Republican Party lost in a landslide.

So there you have it. Put all of this together and you get the chart above: a dozen nobodies with no name recognition and no chance, with the top vote-getter receiving a pathetic 8 percent of the vote. It’s the California GOP in a nutshell.