What is life like in a medium-security private prison? MoJo’s Shane Bauer applied for a job at the Winn Correctional Center in Louisiana to find out. Winn is run by the Corrections Corporation of America, which earned over $150 million running 61 prisons across the country last year. Why is running prisons so profitable? After four months working at Winn, Bauer reports that one reason is simple: the pay for guards is abysmally low and 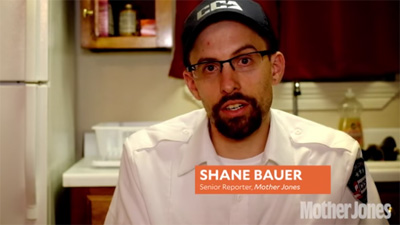 the facility was chronically understaffed. This certainly helped CCA’s bottom line, but it also produced persistent violence that the tiny staff was barely able to control:

On my fifth week on the job, I’m asked to train a new cadet….”It’s pretty bad in here,” I tell him. “People get stabbed here all the time.” At least seven inmates have been stabbed in the last six weeks….Three days later, I see two inmates stab each other in Ash. A week after that, another inmate is stabbed and beaten by multiple people in Elm. People say he was cut more than 40 times.

….If I were not working at Winn and were reporting on the prison through more traditional means, I would never know how violent it is. While I work here, I keep track of every stabbing that I see or hear about from supervisors or eyewitnesses. During the first two months of 2015, at least 12 people are shanked. The company is required to report all serious assaults to the DOC. But DOC records show that for the first 10 months of 2015, CCA reported only five stabbings. (CCA says it reports all assaults and that the DOC may have classified incidents differently.)

Reported or not, by my seventh week as a guard the violence is getting out of control. The stabbings start to happen so frequently that, on February 16, the prison goes on indefinite lockdown. No inmates leave their tiers. The walk is empty. Crows gather and puddles of water form on the rec yards. More men in black are sent in by corporate. They march around the prison in military formation. Some wear face masks.

This is a long piece, and it’s not easy to summarize. Its power comes from the relentless, detailed buildup of Bauer’s record of daily life at Winn. Do yourself a favor and put aside some time to read it.