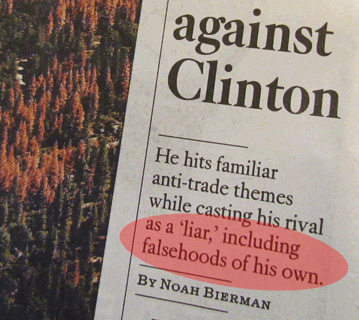 The LA Times headline for Donald Trump’s big attack speech yesterday is on the right. Trump called Hillary Clinton a “liar,” but his own speech included “falsehoods.” Here’s a small sample of other headlines:

The traditional media has something of a taboo against using the word lie. Generally speaking, this is for the best. But now we’re faced with a new situation: a presidential candidate who uses the word constantly while spouting obvious lies himself. This is not a partisan complaint: Virtually everyone who covers Trump agrees that he lies constantly and with gusto.

So should the old custom still hold? I’m not so sure. If Trump is going to loudly call Hillary Clinton a liar at every opportunity, perhaps his own lies should be called what they are. Not falsehoods. Not distortions. Lies.