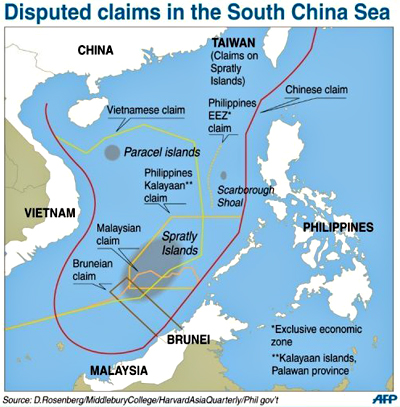 For the past year, an international tribunal in the Hague has been pondering China’s claim to own the entire South China Sea. China has refused to participate in the trial because they were afraid they might lose. And lose they did:

An international tribunal in The Hague delivered a sweeping rebuke on Tuesday of China’s behavior in the South China Sea, including the construction of artificial islands, and found that its expansive claim to sovereignty over the waters had no legal basis.

….“It’s an overwhelming victory. We won on every significant point,” said the Philippines’ chief counsel in the case, Paul S. Reichler. “This is a remarkable victory for the Philippines.”

But then there’s this:

While the decision is legally binding, there is no mechanism for enforcing it, and China, which refused to participate in the tribunal’s proceedings, reiterated on Tuesday that it would not abide by it.

So it’s a moral victory, but not much else. Still, China cares about its international standing, no matter how much they bluster otherwise. This might be a first step toward getting them to enter into serious negotiations over ownership of the various rocks, reefs, and islands of the South China Sea—all of which are governed by different rules regarding maritime law and economic zones. Time will tell.