I wrote my post yesterday about the North Carolina voting law before I had a chance to read the 4th Circuit Court opinion that struck it down. It turns out to be even more amazing than I thought. The court wrote that various provisions of North Carolina’s law “target African Americans with almost surgical precision,” and they weren’t kidding:

The [original] version of SL 2013-381 provided that all government-issued IDs, even many that had been expired, would satisfy the requirement as an alternative to DMV-issued photo IDs….With race data in hand, the legislature amended the bill to exclude many of the alternative photo IDs used by African Americans. 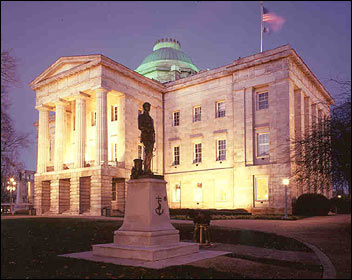 As amended, the bill retained only the kinds of IDs that white North Carolinians were more likely to possess.

….Legislators also requested data as to the racial breakdown of early voting usage….The racial data provided to the legislators revealed that African Americans disproportionately used early voting in both 2008 and 2012….After receipt of this racial data, the General Assembly amended the bill to eliminate the first week of early voting.

….As “evidence of justifications” for the changes to early voting, the State offered purported inconsistencies in voting hours across counties, including the fact that only some counties had decided to offer Sunday voting. The State then elaborated on its justification, explaining that “[c]ounties with Sunday voting in 2014 were disproportionately black” and “disproportionately Democratic.”

It’s not just that every provision coincidentally happens to affect blacks disproportionately. In at least a couple of cases, provisions were added only after the legislature had racial breakdowns in hand so they could make sure they weren’t accidentally targeting whites too.

Remarkably, even with this evidence before it, the district court upheld the law. This prompts a longtime question of mine: how far do courts have to go in believing the justification that a legislature provides for its actions? Obviously you want to be careful with this, but there’s a point at which, literally, everyone knows what’s really going on. And yet courts have to pretend to believe something else. This sure seems like a destruction test of this concept.