Guess what? The Pentagon is still lying about how effective our anti-missile defenses are. David Willman of the LA Times reports on the recent test of an anti-missile interceptor launched from Vandenberg Air Force Base in California:

The missile agency issued a news release that day touting a “successful flight test.” The agency’s lead contractors were no less effusive. Aerojet Rocketdyne Inc., maker of the thrusters, said 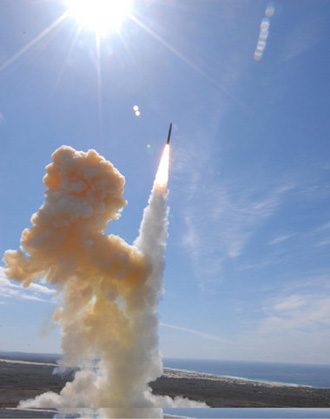 ….In fact, the test was not a success, the Los Angeles Times has learned. One of the thrusters malfunctioned, causing the interceptor to fly far off-course, according to Pentagon scientists.

….Project engineers for the Jan. 28 test had planned for the interceptor to fly within a narrow “miss distance” of its target to test the new thrusters’ effectiveness. That is not what happened. The closest the interceptor came to the target was a distance 20 times greater than what was expected, said the Pentagon scientists, who spoke on condition they not be identified.

“The mission wasn’t successful,” one of the scientists said. “Did the thruster perform as expected? No, it did not provide the control necessary for a lethal impact of an incoming threat.”

A couple of months after the failed test, the Missile Defense Agency was still keeping up a brave face. “In appearances before Congress, the agency’s director, Vice Adm. James D. Syring, has expressed no concerns about any aspect of the test, including the thrusters’ performance.”

Finally, confronted with evidence of the failure, the Missile Defense Agency conceded the problem but insisted that it had been identified and fixed. “Any necessary corrective actions will be taken for the next flight test,” they said. How often have we heard that before?

It doesn’t bother me too much that the test failed. Anti-missile defense is a tough nut to crack, and failures are inevitable. But given the fact that we’ve been working on this for decades and still can’t field a reliable system, isn’t it about time for the Pentagon to at least start telling the truth about whether these systems work?