The University of Chicago sent the following statement to incoming students this week:

Our commitment to academic freedom means that we do not support so-called “trigger warnings,” we do not cancel invited speakers because their topics might prove controversial, and we do not condone the 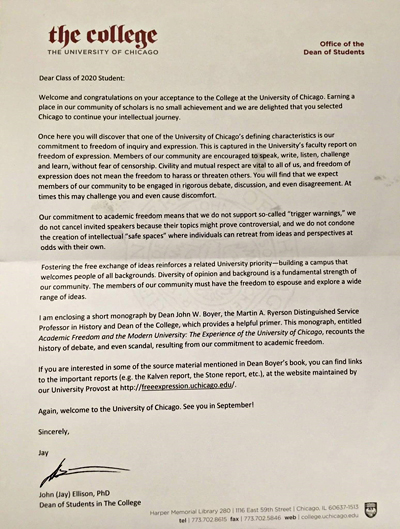 creation of intellectual “safe spaces” where individuals can retreat from ideas and perspectives at odds with their own.

Conservative cheered and liberals frowned. Over at Vox, Emily Crockett writes about safe spaces and what they mean:

“For me as a black woman, it’s really nice to just go out with other black women sometimes,” said Sabrina Stevens, an activist and progressive strategist. “I have to do so much less translation. When you’re black around white people, you have to explain every little thing, even with people who are perfectly nice and well-meaning.”

….Stevens describes many different safe spaces that are important to her own life: breastfeeding support groups that are explicitly women-only to help new moms feel more comfortable talking openly about their bodies, or hair salons that function as an informally black-women-only social space as well as a service.

….Other safe spaces emerge organically, like hair salons, gay clubs, or black churches. The shooting at Mother Emanuel in Charlestown was also a violation of a safe space, which added another layer of devastation to an already terrible crime.

It’s a nice piece about the origin and modern usage of safe spaces, and it’s worth reading. In the end, it boils down to the fact that all of us sometimes need to hang out in places where we can relax completely and not worry that our words will taken the wrong way or that we have to endlessly explain ourselves. “Safe spaces” is just modern jargon for this ancient concept.

But there’s one thing worth getting straight. My assumption is that the University of Chicago is only saying that students shouldn’t assume that any formal part of the campus is a safe space. Not classrooms, not offices, not dorms, not rec centers, not the quad. I think that’s wise. But I also assume they have no problem with students creating private groups that are meant to be safe spaces. They don’t support them but neither do they forbid them or discourage them. They’re indifferent to them.

Is that right? Or does the university go further and try to hinder even the private and voluntary creation of safe spaces?