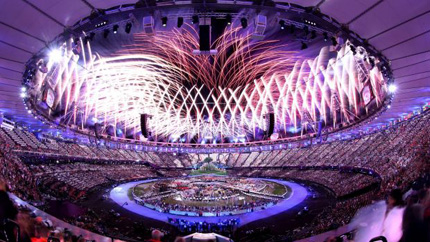 Here is Meredith Blake in the LA Times commenting on the Olympic opening ceremonies last night:

In yet the latest decision to fuel the #NBCfail hashag, the network broadcast the ceremony on a one-hour delay on the East Coast. The West Coast was delayed by an additional three hours. NBC claimed it was delaying the broadcast in order to provide additional “context” for viewers. The real reason, of course, was to draw as many eyeballs and run as many commercials (and women’s gymnastics promos) as possible.

Are we going to keep whining about this forever? The Olympics are tape-delayed so they can be broadcast in prime time. They’re stuffed with commercials because NBC paid a billion dollars for the broadcast rights and commercials are how they make up for that.

We’re not children. We all know this. Nevertheless, we’ve been complaining about it since 1992 and NBC has been resolutely tape-delaying the games anyway ever since. Why? Because that’s how most normal people like it. You know, the ones who have to work during the day and don’t get home until 6 or 7 o’clock.

The only question I have is why NBC allows itself to be bullied by a small squad of elitist reporters and sports purists into making up weird excuses about “context” or “plausibly live.” Why not just say, “Don’t be a child. We’re tape-delaying it so more people can watch.” Their viewing audience, which is much more sophisticated than the reporters and sports purists, will have no problem with this.

POSTSCRIPT: But other sports events aren’t tape delayed. Why the Olympics? Why why why?

Please. Events in the US aren’t tape delayed because they’re carefully scheduled to air when the networks want them to air. Overseas events are usually shown live and re-broadcast on tape delay. But you can’t do this with the Olympics because they run all day.

Also, not to make too fine a point of this, but most Americans don’t give a shit about most Olympic sports. They watch them once every four years, mostly to cheer Americans who win medals, and that’s about it. If it’s even slightly inconvenient to watch, they won’t bother. Despite their whinging, this is also true of the elitist reporters and sports purists, who for 47 months out of every 48 mostly couldn’t care less about rowing or archery or sumo wrestling.