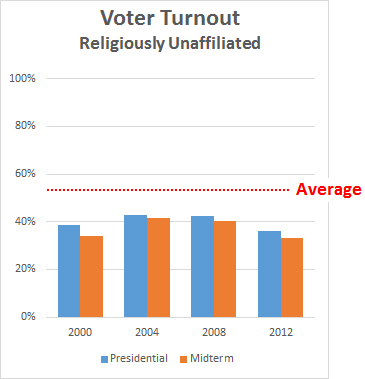 Christopher Ingraham takes a look at a recent survey of atheists and agnostics and asks, “Why don’t the unaffiliated vote?”

As Pew Research Center’s Greg Smith told me earlier this year, “It could be the ‘nones’ are not connected, almost by definition, to religious institutions, which can play an important role in spurring turnout and interest in politics.” It’s also the case that the unaffiliated tend to be younger than the population as a whole. And younger people in general are less likely to vote than their older peers.

As President Obama likes to say, “Don’t boo, vote.” If you’re unhappy with the influence that conservative Christians have on American politics, go out and vote for someone who’s more likely to favor evidence-based policy than faith-based policy. If you’re not willing to do that, then don’t gripe the next time some yahoo manages to get evolution expunged from your local textbooks.