The eternal wait for Donald Trump’s “pivot” for the general election has become something of an inside joke among campaign reporters. People keep saying Trump will pivot any day now, and then he turns right around and says 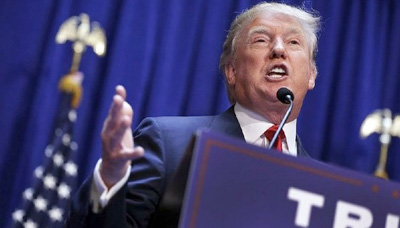 something typically Trumpish that makes it clear he has no plans to ever change.

But the other day it struck me that while we were all mocking him, he did pivot. Sure, a Trump pivot is like a battleship pivot, and it takes a while to make the turn. That’s probably why we haven’t noticed. But ever since he hired Steve Bannon and Kellyanne Conway, he really has calmed down on the stump and changed his persona. Today, Monica Langley of the Wall Street Journal takes note:

The new team, said supporters, has fostered a more disciplined candidacy. “Actually I’m freer now, relying on my instincts and working with a team I trust,” Mr. Trump said in an interview.

….After Mrs. Clinton’s campaign announced late Sunday that she had been diagnosed with pneumonia, many expected Mr. Trump to pounce on the news, arguing that it proved his claim she lacks the stamina to be president. Instead, Mr. Trump told campaign advisers deluged with media calls to stand down. The response struck opponents as uncharacteristic, and some supporters attributed Mr. Trump’s restraint to his new campaign organization.

Mr. Trump said efforts by previous campaign leaders to remake him into a politician were “dishonest.” And, Mr. Trump said, he resisted at times by going off script.

The Republican nominee said he was more comfortable with his new team, which, ironically, has succeeded in some of the same changes sought by former campaign chairman Paul Manafort: Mr. Trump is sticking closer to a teleprompter, giving more policy details in speeches—and making fewer off-the-cuff remarks, which hurt his campaign after the GOP convention this summer.

This is actually kind of scary. I still doubt that Trump can keep this up, but if he does, he could be dangerous. I’ve always figured that if Trump really did manage to calm down a bit, it wouldn’t take more than a few weeks for him to put his old reputation to rest. Pundits would start saying the campaign had “matured” him. Skeptical voters would move in his direction. Republicans would breathe a sigh of relief and embrace him.

Can he keep it up? No telling. But if he does, it will be the greatest con job ever from a man whose entire career has been built on conning the public. He’d probably enjoy that.