Over at Vox, Dylan Matthews wonders why Donald Trump is spending time on Bill Clinton’s alleged infidelities of two decades ago. “The ’90s scandals are pretty old news,” he says. “There are 18-year-olds voting in this election who weren’t alive when the Monica Lewinsky scandal broke in January 1998, and millions more voters in their 20s and 30s who weren’t really old enough to remember.”

True enough, but it comes as no surprise that Trump is doing this. In January, after Hillary Clinton accused him of sexism, he spent several days going after Bill. The same thing happened a couple of months later, and Trump bragged about 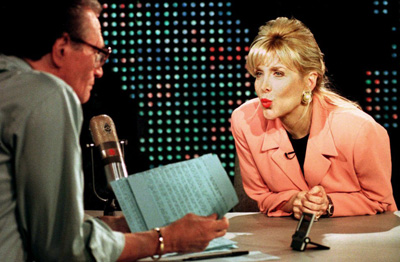 how he hit back so hard that Hillary never brought it up again. He’s basically been warning Hillary away from attacking him as a sexist for many months.

So now that she’s doing exactly that, he pretty much has to demonstrate that he wasn’t bluffing. That’s the Trump way. So prepare to be taken on a trip back to the 90s. We’ve already relitigated welfare reform, the crime bill, super-predators, and more, and now we’re going to relitigate Bill’s sex life. Paula Jones, Kathleen Willey, Gennifer Flowers, and Juanita Broaddrick—basically the entire cast of Larry Nichols’ insane Arkansas attack machine—are about to get yet another 15 minutes of fame. Flowers has come up first, which is no surprise since she was always the most publicity-hungry of the bunch, but the others will all have their turns.

Technically, the attacks aren’t going to be on Bill per se, but on Hillary for helping Bill to “smear” all these women. The Washington Post gave us a preview of this strategy a couple of days ago. Trump’s hope is that it will turn off young women who have been brought up to believe that sexual misconduct accusers should be routinely believed, and that attacking them is a sign of anti-feminist bigotry.

And who knows? It might work. It certainly worked for a while in the 90s—and the press long ago showed that they’re willing to lap this stuff up. On the other hand, even some of the biggest lappers now feel a little ashamed of what they did back then, so it’s not clear they’re really up for a second go-around. Stay tuned.