Non-rich people tend to spend 100 percent of their income, or close to it. Rich people don’t. They spend, say, 50 percent of their income and save the rest. This difference is called the “marginal propensity to consume,” and it seems like it might be a problem if income inequality is rising. The problem is that as rich people get a larger share of total income, total consumption goes down. Here’s an example: 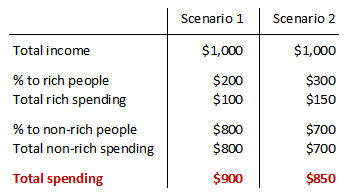 The question, of course, is how big the MPC effect is. Several years ago I investigated this and concluded that it really wasn’t very big. It seems like it should be, but it just wasn’t.

Today, however, Larry Summers directs our attention to a new IMF paper that suggests MPC actually does have a big impact. The authors look at two effects. First, as middle-income families fall into lower income groups, they spend less. Second, as a larger share of income goes to the rich, average MPC goes down. Both of these effects reduce total consumption, which in turn acts as a drag on the economy. Here’s the relevant chart: 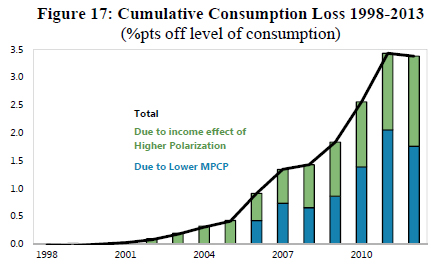 MPC alone reduces consumption by nearly 2 percent, or roughly $200 billion per year. This is still not a gigantic effect, but it’s noticeable. And when you add in the direct spending effect of income polarization, it’s closer to $400 billion per year. That means we’re losing a lot of consumption—which we need—and gaining a lot of capital—which we don’t. The world is so awash in capital these days that you can (literally) hardly give it away.

Now, the authors use some novel estimating techniques in their paper, which is why they come up with a stronger effect than previous studies. The folks with PhDs will have to fight over whether they’ve done their sums correctly. But if they have, it means that increasing income inequality is a lot more than just a matter of unfairness. It’s also a real drag on economic growth.