The savvy thing for liberal pundits to do is to write think pieces that millennials will never read about how stupid millennials are for considering voting for 3rd parties, even though millennials (according to polls) are voting for Team D in a higher proportion than any other age group. Amazingly they figured that out without the sage wisdom from their elders, who are voting for Trump. Stupid Kids Today!

I’ve been ignoring the sudden popularity of this meme, but enough’s enough. As it happens, millennial support for Hillary Clinton isn’t higher than any other age group when you poll a 4-person race—which is, after all, the actual race 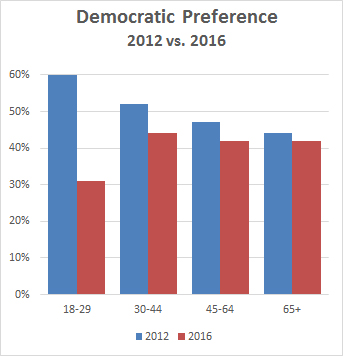 being contested. But even if it were, the issue isn’t raw support. Young voters are far more liberal than older voters and have voted heavily for Democrats for years. The issue is relative support compared to previous years.

The chart on the right compares exit polls from 2012 with a recent Quinnipiac poll. It’s not a perfect match with the exit polls, but it’s close. And what it shows is that millennial voters prefer Hillary Clinton at far lower levels than they preferred Barack Obama four years ago. Other age groups are down too, but just a few points. Only among young voters has support plummeted, and it’s plummeted by enough to put the election in genuine doubt.

So yes, Hillary Clinton really does have a big problem with millennials. As for third parties, I’ll say only this: in 1980, when I was 22, I voted for John Anderson. That sure was stupid. Eight years of Ronald Reagan because Jimmy Carter didn’t quite meet my idealistic standards of excellence for presidents. I’ve never made that mistake again.