I know how pointless this can get, but I can’t help myself. Here are the greatest hits from Donald Trump’s recent interview with David Muir of ABC News. First off, when he met with the president of Mexico, did they discuss paying for the wall or not?

TRUMP: It was discussed that it wouldn’t be discussed.

This is followed by Trump’s usual bragging about how great he is (“I’ve been given A pluses for the job I did in Mexico”) and how fabulously presidential he looked (“Mike called me and said, ‘I’ve never seen anybody look so presidential'”).

Next up, Muir tries desperately to get Trump to explain his immigration plan. We’ve already established that (a) he’ll build a wall and Mexico will pay for it, (b) criminals will be tossed out on Day 1, and (c) anyone who wants citizenship 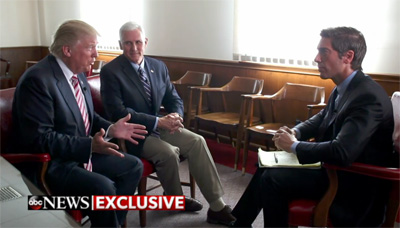 will have to return home and apply through normal channels. But what about all the people who remain?

MUIR: In the last 24 hours, Rudy Giuliani said that Donald Trump would “find it very difficult to throw a family that’s been here in the United States for 15 years with kids who are now American citizens out of this country. That that’s not the America that Donald Trump wants.” So will some of these families be allowed to stay?

TRUMP: First of all he’s 100 percent right. It’s very difficult. It’s a very difficult thing to do….Once we have a secure border…we’re going to take a very good, strong, hard look at the people that remained.

….MUIR: When you take a good, strong hard look, does that mean some of those 11 million undocumented immigrants will be allowed to stay?

TRUMP: It could be.

….MUIR: If they want to be a citizen, they will have to go home?

TRUMP: If they want to be a citizen, they have to go home, get on line.

….MUIR: So when those families do ultimately go home, the ones who have no record, who are here, once you get the wall and the criminals out of here, as you say. Is it self-deportation?

MUIR: Or will you deport them?

MURI: How does it work?

TRUMP: They will— If they want to become a citizen, they’ll go out and they’ll come back in through a process, but they have to get on line.

MUIR: But what is that called? I mean, most people call it—

TRUMP: They don’t call it anything

MUIR: Will they have to go—

We don’t call it anything! Capiche? There is no word or phrase or term or anything else in the English language that describes what Trump is going to do. (Although I suspect “nothing” is a pretty fair guess.)

Next up, will Trump name anyone he’s sorry about offending? As he’s said repeatedly before, he won’t. But:

TRUMP: And now you see what’s happening with Hillary. You see what’s going on with her emails. It’s a disgrace. It’s a disgusting situation where she pretends like she doesn’t know. I mean, she had her emails — 33,000 emails — acid washed. The most sophisticated person never heard about acid washing. Acid washing is a very expensive process and that’s to really get rid of them. Really, and these emails pertain to her wedding or her yoga classes?

Acid washing? Where did he dredge that up? Anyway, what he’s talking about is deleting files and then overwriting the deleted sectors so that no data is left on the hard drive. In fact, this is so common that everyone within shouting distance of an IT shop knows about it, and so expensive that there are dozens of free utilities that do it.

That’s it. Muir had a full hour with Trump and Mike Pence and basically got almost nothing of interest. He spent a full half of the interview on immigration, and while I appreciate his effort to pin down what happens to the illegal immigrants who just stay put, there wasn’t much point to it since Trump has made his position clear before. Ditto for everything else. Unless I missed it, I don’t think Muir asked Trump a single tough question, and not a single question that we don’t already know the answer to. I managed to get a few pieces of snark out of it, but that’s all.